about this book: The worst thing that could happen to a spook is stumbling upon a reason to be alive again. In the case of late Princess Arengel, love is that reason.

Prymona (the human kingdom) is at war with Toholz (the kingdom of grey beings). It is a war that increases the Toholzan army by each human casualty. And Arengel is in the middle of it all, wearing a fate that has waited nearly three millennia to reinstate her as the heiress to the Prymonan throne and deal a death blow to the battle.

Amidst the chaos, she finds The Man with the Red Aureole, as tradition demands of every Prymonan heiress. But why now that wrecked bones are all that should be left of her? Had she found him three millennia ago she would have been crowned the Queen she was supposed to be.

She thus covets that which she doesn't have — the curvy body of the present Prymonan princess; a yearning that may yet destroy both the one she loves and the fate that awaits her. 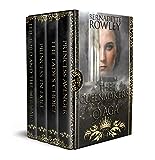