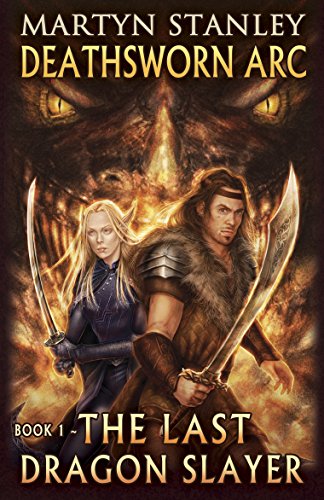 about this book: 'Deathsworn Arc : The Last Dragon Slayer', started out as a fairly simple concept. It was going to be a fairly run of the mill fantasy adventure. As I started writing it though, my enquiring mind started to take over and I ended up exploring things at a deeper level, the characters, the places, how the world worked. The eureka moment was really when I came up with the dark elf, 'Brael Truthseeker' he's really the hinge-pin of the whole series in some respects. The theme of 'The Truth' is subtle in book 1, but it gets stronger as the series progresses.

It isn't a religious book, but it's a book which questions religion, faith and morality. It took me six months to write the first book of the series, and another six to really fine-tune it and make it what it is now.

In the characters themselves I wanted them to have contrasting opinions on things and a certain amount of mistrust for each other. In book 1 they don't really know each other very well. I also wanted to create some racial tension between the characters and I think I succeeded.

A big theme of the book, and a challenging thing to write, was the relationship between Vashni and Korhan. It's uncomfortable reading at times, for some people - but it's supposed to be. She's genuine in her helping and training Korhan, but she's also genuinely treating him harshly for her own amusement. She's a paradoxical character in many ways.

Another aspect of the book which I think is unusual for fantasy is that at times I subtly reference real-world science. In some respects Brael Truthseeker is a scientist, but he's a scientist who has had access to magic. I like his title, I think 'Truthseeker' is a very apt title for a fantasy world scientist, it conveys very accurately what scientists real endeavor is, at least at a certain level.

The world view I present through the characters of the book is one which advocates a certain amount of pragmatism and possibly even atheism, but through the series I criticize these world-views as well. The Deathsworn Arc isn't about telling people what to believe, but more about inviting them to question what they believe and understand their beliefs better. This is more of a series spanning theme and is only subtle in book one.

I think I succeeded in writing what I wanted to write, because both the positive and the lukewarm reviews I've had always seem to mention key elements of the story which I was aiming for. So for that, even in the few less positive reviews, I am pleased.

Examples of this are what Linda Parkinson-Hardman wrote:

"Martyn blends characterisation with location and the bigger, broader questions of life in a blend that keeps the reader interested from the beginning."

"Here is what I loved about this book: First of all, the main character is not your average,"I shall succeed at everything except keeping my ego in check" type of hero. This was important to me as I have seen this in far too many books. I liked that this character had faults and wasn't perfect."

"I ended up really liking one character in particular, the female elf Vashni, and having a caring but strong female character on a quest is a really terrific choice. Her scenes were always excellent, and one in particular at the end was very moving, which is a testament to how much I came to be invested in the characters.

There's a lot to think about, too, in this book. There is a theme about "The Truth" that runs throughout, that is a way of looking at the meaning of life. I like the depth this theme offers and how it helped us understand the character's motivations."