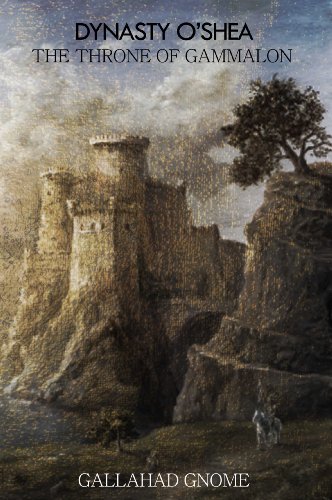 Book: Dynasty O'Shea (The Throne of Gammalon) by Clarissa Cartharn

about this book: “Dynasty O’Shea” is a fantasy adventure fiction for young adults written with a dose of humour and a tinge of romance.

The Kingdom of Gammalon in the land of Spassenia is in a strife and on the brink of a seize by an evil dark lord. But what can the Gammalonians do if those who can save the torn kingdom live in a different dimension?

When Jack O’Shea is compelled to reveal to his four children his origins and a secret stone that unlocks the magical door to Spassenia, he doesn’t realise that his children would be thrust into the midst of a war between Gammalon and evil dark lord, Dravidor. As the O’Sheas journey to save Gammalon from the clutches of Dravidor and his Dark Vale Army, they also learn to slowly unleash the powers that’s been gifted to them. So when death warrants are issued out for the entire family, the young O’Sheas realise that they must now take matters into their hands.

"Dynasty O'Shea" was partially inspired from my love for adventure fiction and movies, primarily Indiana Jones. It was also inspired from the antics of my two fun-loving children who never hesitate in having an adventure themselves. The cover of the book is an illustration of the stone that initiated the adventure for the O'Shea family. The book was completed in the span of three months but a further two months was dedicated to improving and editing the manuscript. The length was partly due to the process of some research that I had to undertake regarding certain plants, geography and even forms of martial arts.

The process of writing is one that involves patience and perseverance. If there is anything that I learnt from writing this book, then it is this. The other is simply the strength of family unity in the face of adversity.

To my readers I wish to say that life is an adventure if you only learn to recognise it. You are the potter of your own life.