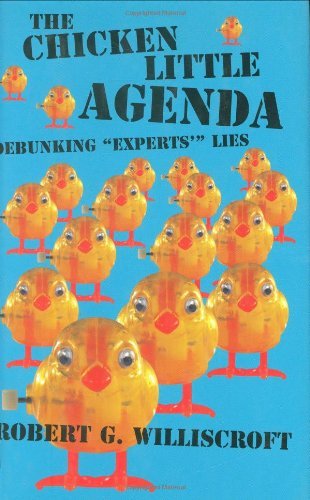 about this book: I had recently retired from a successful military career, during which I spent 22 months underwater on submarines and as a saturation diver, a year in the equatorial Pacific, 3 years in the Arctic, and a year at the Geographic South Pole. When I retired, I opened a publishing business in a small town in eastern Washington State. Because of my science and engineering background, on a regular basis, locals would accost me in my office with questions about this or that item that had appeared in the local newspaper or been discussed on television. I started writing a column I called "The Thrawn Rickle" (old Scottish for a loose, dilapidated heap), that attempted to address some of the concerns of the folks in my community. Soon, the column was being featured in small newspapers throughout the Pacific Northwest. A friend suggested that I collect these columns into a book, and thus was born "The Chicken Little Agenda – Debunking "Experts'" Lies."

"The Chicken Little Agenda" is an eclectic volume that takes to task the self-appointed experts who misrepresent facts to further their private agendas – pretty much across the spectrum of ideas. Subjects range from oil spills to Earth Day and the Greens, from global warming to the ozone layer, from nuclear accidents to nuclear weapons, from our school systems to our governance, and ends on an up note where I look at the wow factors the Universe throws at us.

"The Chicken Little Agenda" is a happy book that leaves the reader with the feeling that "I knew that all along." It confirms the reader's common sense in the face of agenda-driven experts that have taken over television and newspapers, and fills in some of the knowledge gaps that most people have when it comes to science and engineering – using every-day concepts and understandable language.

"The Chicken Little Agenda" gives the ordinary person ammunition to confound self-appointed experts in virtually every aspect of modern life.

Video 1: Hard Sci Fi author, adventurer, and all around fun guy, Dr. Williscroft comes back on Writer Groupie to chat about his work
Video 2: Dr. Robert Williscroft describes his life of adventure, and relates a couple of specific stories of high adventure and near death