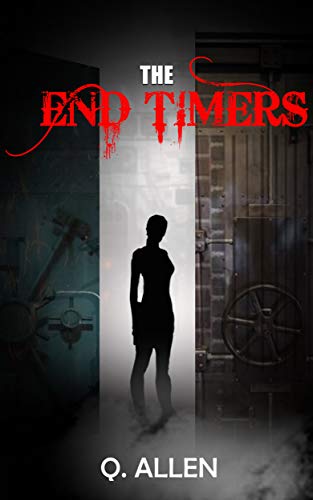 about this book: Is Tammy losing her mind or is she uncovering a dark conspiracy?

Doomsday prepper Tamara Umbra just bought a membership into a luxury fallout shelter called The End Timers. During a weekend visit to the shelter an incident occurs trapping her and her fellow members inside. Not able to take her medication, she starts hearing a voice in her head. At first she makes an effort to fit in with the others and ignore the voice. But, the voice continues. It tells her that there is a conspiracy at work against her and everyone at the shelter is a part of it. It tells her to kill. Tammy struggles to decide if the evidence the voice is showing her real or imagined. Is she the target of a covert operation or is she just becoming a psychotic killer?

This story came to be through my observation and fascination with the history and happenings of some elite groups in the world today. I combined some of the more popular beliefs of end time prophesies and doomsday theorists with the experiences of a few acquaintances who where a part of one or more of these groups to produce what I hope gives a Stranger Things-like vision of what could be going on... right now.

While doing research for this book I learned a lot about the ideas and techniques of doomsday preppers. It's not all about the end of the world. Sometimes the doomsday you face may be your own personal event. I also found that for the most part, popular conspiracies are all linked. I know you've heard it before but, now in the age of FaceBook, to see the footage of what many believe are the pieces of these conspiracies is fascinating. (Of course, I already knew that! It was just exciting seeing so much evidence to support my idea!)

Whether you believe in end time conspiracies or not, I hope you enjoy the series!