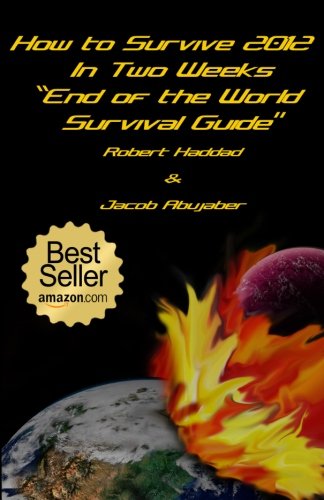 Book Review: How to Survive 2012 In Two Weeks - End of the World Survival Guide by Robert Y Haddad

about this book: This book is a short and easy guide to prepare yourself and family for the 21st of December 2012 for what some say will be "The End of the World As We Know It" or TEOTWAWKI. I was sitting with friends and we were discussing what we would do if 2012 was the end of the world, and after talking for over an hour about what I would do, everyone told me that I should write a book about it. So I did. It took me 2 months to write my book, including research. Basiclly seeing as how it would take someone around two weeks to run through the prep portion of my book and have it all complete I decided to name the book "How to Survive 2012 in Two Weeks.

For the cover I decided to design it myself, and I have to say I'm quite happy with it. During the research for my book, I learned a few things which I didn't already know, but mostly how to build a bunker, which I did with friends, and also how to grow a farm as well as raise animals which I think will be very important after the 2012 disaster has passed. This book will work for the 2012 disaster, but I think that most people would agree that this book would also work for a number of disasters in general. I didn't want to write a book that was just dry instructions, so I think and hope that people enjoy reading it.

If your worried about December 21st 2012 or any other catastrophe you will definitely want to read this book and keep it handy. Just in case. Knowing what to do in preparation, as well as during and after the actual incident could easily be the key to survival. This is a pretty complete resource for any disaster and I highly recommend it! [by S. Halteh]

Video: How to Survive 2012 In Two Weeks - End of the World Survival Guide