about this book: Empress Wu Zetian is one of the most controversial women in all of world history. Born in 624 CE Wu Zhao (her reign title, given to her just weeks before her death in 705 CE, was Zetian) was bright, highly educated, and politically ambitious -- everything the neo-Confucian philosophers of her time felt a woman should not be.

The fact we remember Wu Zetian more than thirteen hundred years after her death speaks to both her boldness in believing and acting upon her belief that women and men are equal and in the perpetual double standard towards women's behaviour relative to that of men.

For all the criticisms, Wu Zhao was actually a very good ruler, one of the best in the Tang dynasty. She cut military spending to bring soldiers back to their farms as part of her strategy to improve crop yields. She patronized dozens of women writers and employed women in her government in jobs typically held by men. She sponsored the arts and literature and encouraged fair and balanced criticisms of her rule (within reason).

So instead of focusing on how she came to power, I wholeheartedly encourage you to see Wu as the skilled and able ruler she was.

Learn more about her in "Empress Wu Zetian," book five of the Legendary Women of World History. 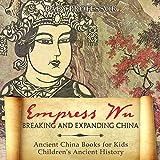