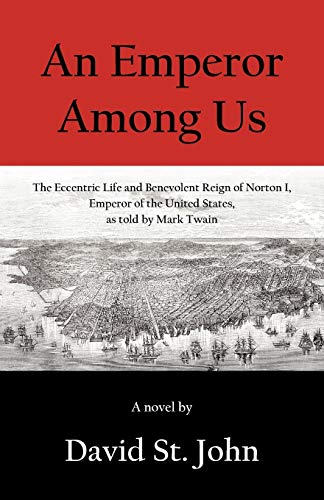 Book: An Emperor Among Us - The Eccentric Life and Benevolent Reign of Norton I, Emperor of the United States, as Told by Mark Twain by David St. John

about this book: America has had many presidents, but only one emperor!

This is the story of that emperor, as told by his friend, Mark Twain.

Of course, he wasn't really an emperor. Joshua Norton had sailed into San Francisco Bay, 31 years earlier, in 1849, at the age of 30, with $40,000 in his pocket. Within four years, he had increased his fortune to about a quarter million dollars. But in another four years, he was penniless. In a singular stroke of bad luck, he had lost it all, including his sanity and sense of reality – at least as far as his own person was concerned. He disappeared for a time, and reappeared, proclaiming himself to be the Emperor of the United States, and spent the rest of his life wandering the streets of San Francisco, making and enforcing his proclamations, selling his own private currency, and looking out as best he could for the best interests of his adopted city.

No matter what people thought of him – and most had an overwhelming favorable opinion – this man had become a fixture in early San Francisco society. From the day he sailed into the bay in the autumn of 1849, to the day he declared himself "Emperor of the United States" in 1857, until a cold, wet January evening in 1880, Joshua Norton's life was an important part of the life and growth of this city.

Although a pauper, the people of the city fawned over him. Bankers bowed to him. Politicians groveled. Business leaders gave him gifts. And policemen saluted. He dined in some of the city's best restaurants for free. He always had complimentary seats at the theatre. And he travelled gratis on the railroads.

His death was reported across the country. Newspapers in Seattle, Portland, Denver, Cincinnati, Cleveland, and New York devoted a great deal of space to his death. Mark Twain, once a reporter with the Morning Call newspaper in San Francisco, had known Emperor Norton , and now, living Hartford, Connecticut, read of his death in the New York Times while vacationing at his wife's family home in Elmira, New York. "I found a great deal to admire about him," said Twain. "I thought he was a lovable old humbug!"

"There is much to like in this original tale," says one early reviewer. "It draws effectively from Mark Twain's writings in bringing this little-known historical figure to life."

Author David St. John says, "I hope readers enjoy 'An Emperor Among Us' and find Emperor Norton as fascinating as I do. Also of great interest will be the cast of characters surrounding Emperor Norton, including San Francisco luminaries such as James Lick, Sam Brannan, Domingo Ghirardelli, Frederick Marriott, and Andrew Halladie. I also think readers will be fascinated by the portrayal of early San Francisco, also an important character in the book, as it grows from the tiny village of Yerba Buena to a full-fledged cosmopolitan city."

Another early reviewer states, "Readers will enjoy all the historical tidbits alongside the 'main course' in this convincingly-told fictional account of a true-life character."