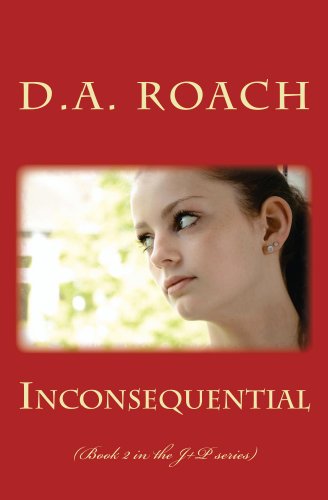 about this book: This book is the second in the J+P series. It is based on people I knew in college and some of their personal struggles as they transitioned to college. The main character, Perry, comes from an emotionally abusive family. It's common for her mom to tell her she looks too fat or she's not capable of making good decisions. These comments shaped her inner self ...thick with emotional scars and insecurity. Growing up with these comments and expectations is all she has known...until she met an incredible group of friends Freshman year. She quickly found she had a different and unhealthy family relationship compared to her friends.

But knowing this is not enough. How do you break free of the abuse and begin to heal? Inconsequential follows Perry's second year of college. Her parents are still entrenched in her life but she is feeling closer to freedom everyday. She has to keep up her grades to get accepted into the competitive school of Life Sciences. If she doesn't make the cut, her parents will pull her out of school and her chance at freedom will be lost.

Besides her struggles, Perry grows very close to a group of guys in her dorm. Jared and Greg share a room on the guys' wing. They are both very protective of Perry. She is attracted to Jared but he is oblivious to her feelings. Meanwhile, Greg and his friend find themselves drawn to Perry and finds herself in a complicated situation walking the line of friends or lovers. Unfortunately, Perry does not have a healthy view of love due to her abusive upbringing and she is not equipped to make good choices in this situation.

Perry turns to cutting herself when her emotions bubble over. No one taught her to do this, but it saves her from the pain pulsing throughout her. Growing up she had no voice against her parents and it was suffocating. She does not do it for attention, in fact she hides it and is ashamed of it. Her friends don't realize that she is self-harming herself. They understand her parents are abusive but have no idea how deeply affected she is.

I entitled it Inconsequential because Perry's feelings and thoughts are considered Inconsequential by her parents. They just don't matter. Her parents know what they want for her and nothing is going to stop their plan.

I think this book will provide readers with insight of what an emotionally abusive relationship can be like for the victim. We often hear about physical abuse on the news and it is so shocking. But emotional abuse is just as punishing and scarring for the victim.