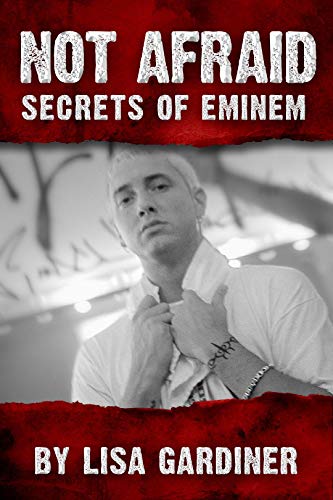 Book: Not Afraid Secrets of Eminem - Birth to 2020 by Lisa Gardiner

about this book: I was inspired to write Not Afraid Secrets of Eminem because I realized there were so many stories and startling secret details, I knew about Eminem's life that constantly amazed my friends and that not many people know.

I've noticed that so many articles and YouTube videos online about Eminem don't REALLY answer the questions in their clickbait titles and just regurgitate old information.

I answer questions people want to know about his mother's Munchhausen's syndrome by proxy diagnosis and the court case against her for child abuse. About Kim Mathers about all four of Eminem's children. I tell you about Eminem's first meeting with Dr Dre, the details of his battle to achieve fame, and about his close friendship with Elton John.

I tell you what REALLY happened between Eminem and Mariah Carey in detail, which one of them is telling the TRUTH and about what happened to Eminem's romantic relationship with Brittany Murphy.

I give you the TRUTH about which celebrities Eminem has ACTUALLY dated and which ones the media made up for click bait.

I tell you what Debbie Mathers has been posting on her secret social media accounts. What are his mother's political views?

I answer questions such as -Who are Eminem's four children? - Who will inherit his wealth? Who is the child Kim raises on her own?

Why did Eminem attempt suicide once? What other times has Eminem nearly died?

Why did Kim go to jail? Why did she attempt suicide? Why did a friend of Eminem's from a former hip hop group kill himself when Eminem wouldn't respond to his letters? Why was Eminem interviewed by the Secret Service?

I tell you about Eminem's relationship with Trump before he became president.

ALL THESE QUESTIONS ANSWERED IN-DEPTH AND MANY MORE!

A critical analysis from a writer with a master's degree with honors. I try to be fair to all the individuals in Eminem's life to give you an idea of what they have said about their situations including Kim and Eminem's mom. I go in-depth into what people have said about Eminem's relatives as well as what they've said themselves to give a fair picture instead of glossing over the surface and being biased.

Knowledge gleaned from thousands of interviews, books, YouTube videos, and social media postings to track down the full answers to questions that have puzzled Eminem fans for so many years.