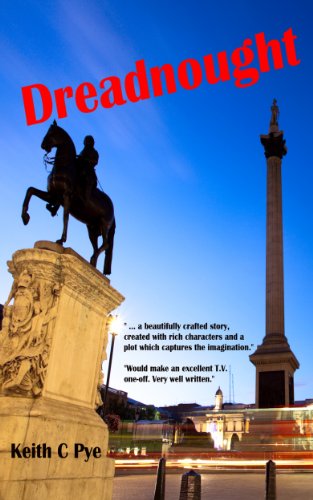 about this book: The Carver & Banan series is set in a time when three Empires competed for supremacy. The old Empire was by far the largest the world had ever seen. In Europe a wannabe Empire was flexing its muscles for what was to be a showdown - or showdowns - of epic proportions. And, across the Atlantic an embryonic Empire was in the making (except that even its own citizens did not recognise what was happening).

The books' heroes are two men from very different cultures and backgrounds who come to respect, like, and trust each other. One, after a private school education and a typically robust Victorian upbringing, joins the Royal Navy as a Midshipman and works his way through the demanding training required of a future officer in the world's greatest navy. The other skips as much of his public school education in Boston as he can manage, learns how to fight and win, and develops the ability to lead men in the fast-growing US Navy.

Dreadnought is set in 1904 - the beginning of the confident and ambitious Edwardian era when both the US and Great Britain believed they could save the world through Christianity and Technology. Both ambitions seem a bit naive nowadays but one could argue that they were a great deal more laudable than the much more aggreesive Imperial ambitions of certain other nations.