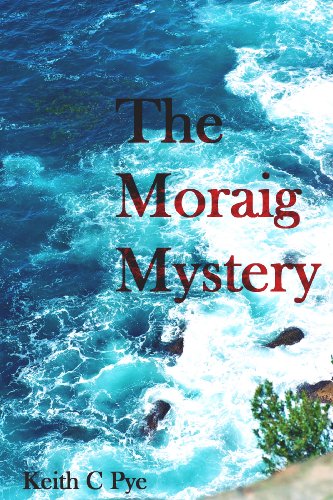 about this book: The luxury Cunard liner, Lusitania, was torpedoed 100 years ago this year (2015) with tremendous loss of life – mainly British and American. She was built in Glasgow at the famous John Brown yard and – thinking about the tragic contrast between the exciting build period, full of hope and enthusiasm, and the heart-wrenching deaths of so many people a decade later – prompted me to base the Moraig Mystery in that time and around the John Brown Yard in Glasgow.

Glasgow is a beautiful city set on the estuary (Firth) of the river Clyde whose scenery is even more beautiful. The trip by boat down the Firth of Clyde is a stunning voyage through typically grand Scottish scenery, past ancient islands, medieval castles, and sleepy fishing villages. If you took that trip today you would not pass the island of Moraig but you'd pass scores just as rugged and remote.

Moraig is the second in the Carver & Banan series. Following their success with the Dreadnought affair, they are sent to Scotland to find out why Admiral Sir Jacky Fisher's nephew died in an apparent accident.

The mission, set in 1906, gives Carver and Banan's relationship time to mature a little and explores further the issue of why Banan is on the run from the US Navy. In the process there are the joys and perils of beautiful women to negotiate, the complications of a naval architect's life to unravel, the small matter of stores and equipment going astray, a murder or two to ponder, and even a brief look at the early submarines in the Royal Navy.

One of the elements I particularly enjoyed writing about was that of the early steam ferries that plied their way up and down the Clyde in all weathers. A great many human stories are bound up in those old ferries – the businessmen who commuted to Glasgow and back, the workmen who used them as a convenient way to get from job to job, the islanders from the outer isles who used them as a way to get their produce to market, and, of course, Carver and Banan for whom they were both a joy and a trial.

The Moraig Mystery is a convoluted mystery set in enigmatic and dangerous waters, which is why I chose the cover illustration. Navigating such turbulent, life-threatening environments is what Carver and Banan do best and I hope you enjoy travelling with them off the bleak and storm-battered island of Moraig. It's a choppy journey but at least you won't get sea-sick in your armchair.