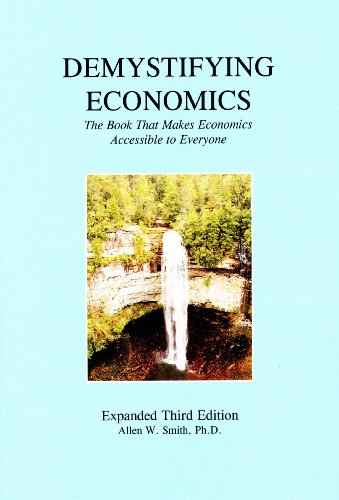 Book: DEMYSTIFYING ECONOMICS - The Book That Makes Economics Accessible to Everyone by Allen Smith, Ph.D.

about this book: Making Economics Accessible to Everyone

Most people do not have a very clear, or accurate, understanding of what economics is about, or how it affects them in their daily lives. Some believe it is a business subject, others think it is about money in general, and still others associate the word economics with personal finance. Actually, economics is about all these things and very much more. Economics is a science of such great importance that it is one of only six fields in which the coveted Nobel Prize is awarded for outstanding achievement each year.

Economics is the study of choice. Specifically economics is the study of how individuals and society choose to use limited resources in an effort to satisfy people's unlimited wants. Both individuals and nations have limited resources. Individuals have only so much money and other assets, and only so much time. A nation has a limited number of factories and machines, working-age people, and natural resources. But, despite the existence of limited resources, people still have unlimited wants. We do not have nearly as much as we would like to have. Together, the problems of limited resources and unlimited wants form what is known as the problem of scarcity, which is the most basic of all economic problems,
Unfortunately, most Americans are economically illiterate, and that includes many doctors and lawyers, as well as the majority of members of the United States Congress. They are illiterate because they have never been introduced to economics at any point during their formal education. Economics is not a required subject in most high schools, and many colleges do not make it a graduation requirement. Thus it is common for many students to gradate from high school, go on to graduate school, law school, or medical school, and never be exposed to economics. The financial collapse of 2008 and the accompanying Great Recession, should never have happened.. And they would not have happened if the American people were economically literate.

The voters would not have allowed our nation to engage in such great economic malpractice for so many years. We have had two modern presidents who have turned their backs on economic policies that worked well in this country for forty years. Ronald Reagan wanted nothing to do with mainstream professionally trained economists. Unless Reagan could find an economist who agreed with his proposed policies, he would turn instead to politicians for economic advice.

When George W. Bush proposed a second large, unaffordable tax cut in early 2003, more than 400 of the nation's top economists, including 10 Nobel Laureates, signed a statement opposing the tax cut and published that statement as a full-page ad in the New York Times. Where were the American people when this took place? The President of the United States was putting the well-being of the American economy in great danger by ignoring all the experts. If the American people had been literate in economics, they would have rose up in protest. That second, large, unaffordable tax cut, which economists were so opposed to, was the straw that broke the camel's back . It was a major factor in the 2008 financial collapse.

I have been waging war against economic malpractice and economic illiteracy in America for nearly 40 years. My first book, "Understanding Inflation and Unemployment," was published in 1976, and I am proud to report that used copies of that 40-year–old book are still available for sale on Amazon.com

In 1986, Random House published my high school textbook, "Understanding Economics," which became an instant success,. and was used in more than 600 schools in 48 states. I was pleased to be able to have such an impact on fighting economic malpractice, but I was not yet done. I wanted to write a book for the layman that would make economics accessible to anyone who could read. I wanted a non-technical layman's approach which could be read by people who had no prior knowledge of economics, The first edition of this book was published in 1996. It was so successful that I revised it and put out new editions every few years. The current edition, "Expanded Third Edition, was published in 2008.

You will not become an economist by reading this single book. But I can promise you that, if you read it thoroughly, and give a lot of thought to what you read, you will no longer be economically illiterate.