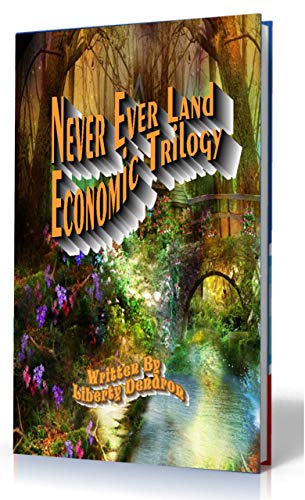 about this book: There is something strangely attractive about "Never Ever Land Economic Trilogy", an economic fiction story. Liberty Dendron break the mole and lets the pieces fall wherever they land, readers imagine a new system of a political economy. Inflation and Taxation. Part of Liberty Dendron's wisdom is to remind us that economics is more than a simple formula of supply and demand, buying and selling. Those things exist, but they are embedded in a complex set of social and political power relationships that ultimately have far more influence over our lives than mere pricing mechanisms.

Not all Books of fiction are a complex political economy. "Does anyone wonder what the banking system looks like in Never Ever Land?"

Without debt and capitalism, "mankind would be living in caves and eating whatever it killed," But when people are destitute or owned as slaves, when enemies of the state have their wealth stripped away, or when people are chattel and have no access to money of their own, the continued existence of capitalism is a reassurance to those excluded.

The fantasy ignores sound money and belittles those who separate fact from fiction. This fable teaches the more unpayable the debt, the merrier.

In Socialism the gold is that no one would be poor and no one would be rich, a great equalizer. Some people think the problem with socialism is it will fail because the harder to succeed the greater the reward but when a government takes all the reward away; no one will try or succeed.