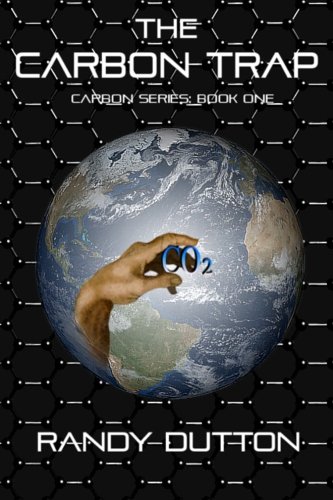 about this book: The Carbon Trap is an ecological thriller describing mankind's attempts to control carbon dioxide going awry and threatening all life on earth. This is a future world where global financiers strive to wrest control over population levels, individual freedom, and private property. Their means are extreme -- using genetic engineering to manipulate the environment, and social engineering and computer hacking to profit from it. The story line has a strong set of non-typical characters, and quite a love story initiates between two opposing forces.

• What inspired you to write this book?
My passion for science and nature inspired me, and my retirement from the Navy, departure from my job as a VP of a tech firm gave me the time. I'm a science and political news junkie. Nearly every day I read news releases and articles of genetic engineering and computer security issues -- assisted by my journalist wife who writes about such topics. I also live on 124 rainforest timbered acres of CO2-loving trees.

• How long did it take to write it?
Once I decided to take years of research and put it to use, writing the book took six months.

• Who are the primary readers of your book?
Readers who enjoy Michael Crichton and Tom Clancy, and who love learning about science, innovations, and a good debate between conservative and progressive goals, are my targeted audience. Jay Lehr, Science Director, Heartland Institute wrote: "Until now only the late great Michael Crichton dared to tell the fraudulent global warming story in his novel "State of Fear" that cited all the science that puts the lie to the fearmongering going on for two decades. Now Randy Dutton has followed suit with an incredible story of action and intrigue that will excite you and delight you and inform you just how bad things could be if the bad guys win."

• How did you come up with the title?
The Carbon Trap is a science term representing the permanent sequestration of carbon from air. Many progressives believe rising carbon dioxide is the preeminent threat to earth, and they will do whatever technically possible to reduce it. This book shows that doing so could destroy most life on earth.

• Why did you choose this cover?
The cover is a play off the Sistine Chapel fresco. No longer is man touching the hand of God, but using science to pull CO2 from the air. Essentially, man has replaced God with environmentalism.

• What was the hardest part of writing your book?
The hardest part of the book was trying not to be overly technical. I may not have entirely succeeded. The more technically literate readers love it. I learned as a 2008 state legislature candidate I can get overly excited about issues that may be beyond some of my audience.

• Did you do research for your book?
I love researching, and that becomes obvious to anyone reading the book. Even though the book is set in the near future, most of the science is real, and what isn't, is a realistic projection of what may soon be real.

• Did you learn anything from writing your book and what was it?
I wouldn't have believed it until this book but characters really can take over. My protagonist, Anna Picard seems very real to me, and apparently to many people who have read the book. She's very complicated -- not your typical femme fatale.

• What do you want to say to your readers?
To my readers, I wrote this book with a strong personal belief in its message, that mankind's overreaction to events often is more an excuse to control people than the events.