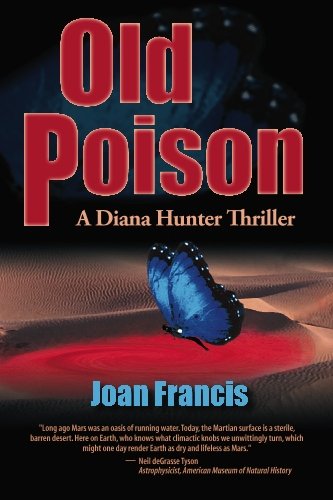 about this book: Environmentalist Evelyn Lilac believes that Mars was once an oasis with rivers and oceans and that a petroleum company is about to unleash an alternate fuel that would make the Earth as dry and lifeless as Mars. Though private investigator, Diana Hunter, suspects Evelyn is a nut case, she can see that the woman is truly frightened and tries to help her. When Evelyn's mutilated body is found in the desert, Diana sets out on a dangerous quest for the woman's killer. The trail leads her to a number of bizarre characters in Los Angeles, New Mexico and deep into the rain forest of Costa Rica. The closer she gets to the truth the more lives are endangered, especially her own.

Joan Francis, Francis Pacific Investigations. As a licensed private investigator I usually limit my clients to attorneys. If you take a lay-person as a client you end up having to investigate your client before you can investigate his case. But no matter how carefully one selects clients, it's still possible to end up with someone who has a hidden agenda or is a nut case. In my novel, Old Poison I decided to give my fictional PI a client with a most improbable case. The fun thing about the way I write is that I just put the character into a situation on the page and follow her around and see what happens. In this case, Diana led me to research climate change, water on Mars, alternative fuel, and to spend a wonderful month exploring the rain forest in Costa Rica.

Though my story is fiction, the shocking thing is that much of what I wrote has since been verified as fact. If your want a real shocker, after you read my book, read Cal Tech's study of what hydrogen fuel might do to the atmosphere. Their study was published three months after Old Poison.

My book cover was from a dream and my title was chosen with the assistance of Sue Grafton. Sue also consulted with me for one of her books and mentioned me on the acknowledgements page of her book, R is for Ricochet.