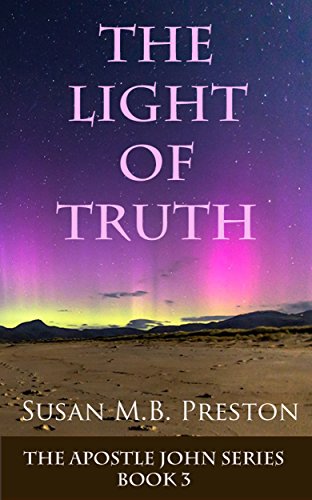 about this book: Book 3 in the Apostle John series, The Light of Truth, was the most difficult for me to write. When last my husband and I talked about it, he said, "You had better hurry up and finish book 3 if you want me to help you with it." That was when he was told he was dying. Three weeks later, he was 'gone'.

I missed his comments, the discussions we had about the characters, who, over the previous two books had become family.

But, eventually, I picked up and continued the story... and it is now available.

Is the light of truth beginning to dawn on Rachel and her Jewish mother?

Benjamin, great-grandson of the Apostle John, is helping the last living Apostle to finish writing down his memories of Jesus Christ before the Roman authorities clamp down on him yet again. Will they finish before the Apostle runs out of time?

But the Christians are not the only ones in danger.

In a crisis, Rachel's mother seeks help from the Apostle John. And Rachel comes into increasing contact with the Christians.

As Jews, both women are in danger of being disowned by family and community for talking to "heretics."

Meshua, Rachel's father, is becoming increasingly erratic. Will he respond with the rage that seems to be brewing just underneath the surface?

When the unthinkable happens to Rachel, will the truth--and the possibility of love--urge her onward to a new and different life? What will the future hold for Rachel and Benjamin?

Book 3 of the Apostle John Series takes you into the lives of the earliest Christians in Ephesus as they seek to live and walk within the light of truth.

Video: The Light of Truth by Susan Preston