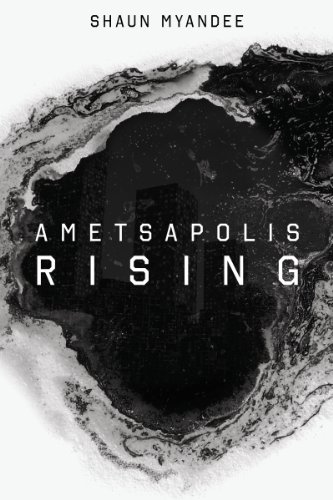 about this book: Ametsapolis Rising is a post-apocalyptic, dystopian sci-fi novel set in the 24th century, after most of the world's human population has been killed in a cataclysmic nuclear war fought over the earth's dwindling natural nesources. Ametsapolis is a vast city within whose walls the survivors of this war have begun to build a new civilisation in one of the few regions not completely tainted by radioactive fallout.

The key to the city's ongoing survival is the post-war breakthrough of human cybernetic implants. They allow the citizens of Ametsapolis to survive the harsher world left behind after the war, and to regain some semblance of normalcy. They have become so necessary and so commonplace however, that their manufacturers have become incredibly wealthy and influential. They use this wealth and influence to maintain de facto control of the city, and when events unfold to threaten their grip on Ametsapolis, the city is consumed by bloody revolution. The tale is told in three parts, each following one of the three main players in this uprising.

• Who it's for:
Anyone really. I know that's a cliché, but I really believe it. Though it is ostensibly a sci-fi novel, I think it might be better described as an adventure/thriller tale with sci-fi elements. If you like stories with a lot of twists and turns, complex characters that are more than a little morally ambiguous, a touch of romance and light humour, and spectacular action, then I'm sure you'll love Ametsapolis Rising.

• A little trivia:
Ametsapolis comes from the Basque word for dream, making it the "city of dreams", a deliberately ironic name given the events that unfold within its walls. Why Basque? Because Ametsapolis was founded by survivors from all kinds of far-flung places who found themselves thrown together in the aftermath of the war. A lot of the geographical names and so on are derived from modern-day European languages. Ametsapolis is located in Europe, specifically in the region of Northern Italy.

• About the Author:
Ametsapolis Rising has been something of a labour of love for me. I have been working on it on and off for several years, but quit my job a little over a year ago in order to devote myself to it full time. I finished my final draft a few months ago and self-published it a little while after that. I've always been fond of stories that are about more than just their obvious plot events, tales that hold a mirror up to the world we live in; and science fiction has always been the best at that, to my mind. Ametsapolis Rising is my attempt to touch on themes that are relevant today, but still tell an engaging and entertaining tale. I hope you'll like it.