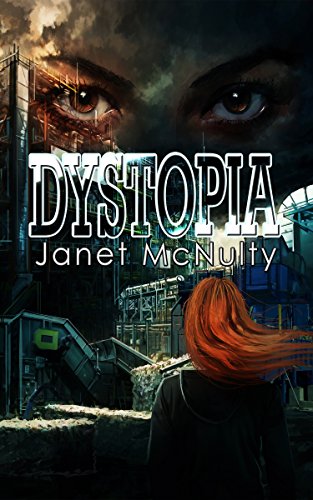 about this book: The United States no longer exists.

The heartland is now a barren wasteland.

Only the east and west coasts have human life.

No one is free as everything they do is controlled by an oppressive government.

Everyone is tracked with a chip implanted in their arm.

In a world where everything is controlled, one young woman will be forced to make a choice.

Current world events gave Ms. McNulty the idea for this book, the first in a trilogy. Though a dystopian novel for young adults, Dystopia is also a commentary about modern society and our propensity to look to government, groups, or organizations to solve our problems rather than to solve it ourselves. Set in a world of fear and intrigue, Dystopia is a unique look at where we could end up if we refuse to take responsibility for our lives.

But political commentary aside, the book itself is a fast paced story as Dana tries to escape her world. Teens and adults alike will be frightened by the world of Dystopia and learn something about their world as well.