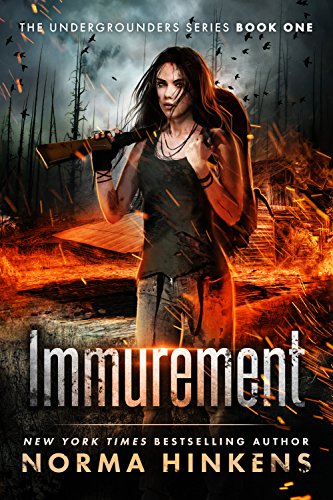 Book: Immurement - The Undergrounders Series Book One by Norma Hinkens

about this book: The earth's core overheats. The sovereign leader vanishes. A young girl is the survivors' only hope.

What little land is habitable is patrolled by cutthroat gangs of escaped subversives, but that's not the greatest threat facing sixteen-year-old Derry Connelly, her brother Owen, and a ragged band of Preppers holed up in a bunker in the Sawtooth Mountains. Mysterious hoverships operated by clones are targeting adolescents for extraction.

Owen is one of the first to disappear. To save him, Derry must strike a deal with the murderous subversives, and risk a daring raid to infiltrate the heart of the extraction operation.

But will the rookie leader falter when forced to choose between her brother and a clone who ignites something inside her she didn't know was possible?

Norma Hinkens grew up in Ireland, land of legends and storytelling. She writes fast-paced, end-of-the-world young adult sci-fi thrillers with protagonists who face staggering odds. The Undergrounders Series (Immurement, Embattlement and Judgement) is a dystopian thriller trilogy set in a world in ruins after a ring of volcanos around the globe erupts. If you like apocalyptic tales, with gritty complex heroines, and twists you won't see coming, then The Undergrounders Series is for you!