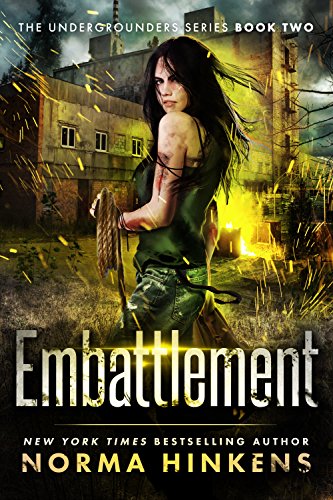 about this book: Norma Hinkens grew up in County Donegal in Ireland, land of legends and storytelling. Ireland has a long and rich literary history stretching back to the Celts, and to this day you don't have to go far to find someone who can entertain you with a good "yarn." 1984 by George Orwell was the book that spawned her interest in the dystopian genre and she has never forgotten that Big Brother is watching. She has always been fascinated by regimes and resistance movements, and the heroes who emerge from atrocities. As an author, she finds it intriguing to place characters in dystopian, post-apocalyptic or sci-fi settings and watch what unfurls inside them as they go head to head with staggering odds. After spending several summers in Idaho, and learning more about Preppers and survivalists, the idea to plant Derry Connolly in a bunker community of homesteaders and mountain men took seed and The Undergrounders Series was born.

The Undergrounders Series (Immurement, Embattlement and Judgement) is a sci-fi dystopian thriller trilogy set in a world in ruins after the earth's core overheats and a ring of volcanos around the globe erupts. The main protagonist is Derry Connelly, a sixteen-year-old girl who survives, along with her brother Owen and a band of Preppers, in an underground bunker system. The scorched earth is patrolled by cutthroat gangs of escaped subversives, but that's not the only problem. Mysterious hoverships operated by clones extract adolescents for their DNA in a bid to replenish the population. When Owen disappears, Derry strikes a deal with the murderous subversives and leads a dangerous mission to get him back. Fasten your seatbelt for this fast and furious post-apocalyptic thrill ride!