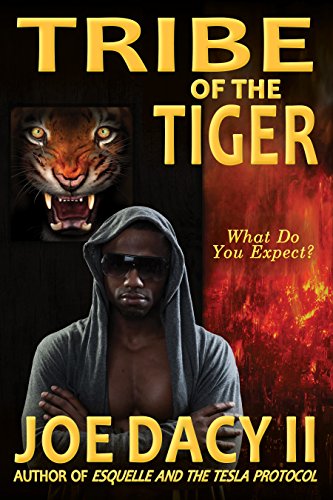 Book: Tribe of the Tiger by Joe Dacy

about this book: This quirky, comical novel draws on my experience as a Detention Officer in a Texas county jail when I spent several months supervising the "gang pod," an open-space facility housing up to 48 Crips and Bloods gang members. During this time, I became familiar with their street language and, more importantly, their curious "culture," which informs their criminal and "social" activities.

My law enforcement career also gave me an in-depth look at our criminal justice system, specifically its flaws. During my preparation for writing the story, I also garnered news accounts of the bizarre civil actions at the time. Almost all of the court cases cited were literally "ripped from the headlines."

My characters inhabit a surreal urban environment, a kind of fear-charged, alternate reality with few of the technological features for a modern metropolis. Think Gotham, with its dark, crime-ridden milieu.

The denizens of this dystopian realm are, intentionally, all stereotypes. They represent societal memes. The Tiger, my gang leader, is the worst stereotype of all. You will find the phrase "What Do You Expect?" throughout the story. Isn't that what we say when, for instance, a lawyer comes up with some strange defense strategy? "What do you expect? He's a lawyer?"

The novel takes a humor-infected look at how fear twists a society, forcing its members to choose between security and freedom, a fact that is now apparent in our own jittery world.

Video: Tribe of the Tiger by Joe Dacy