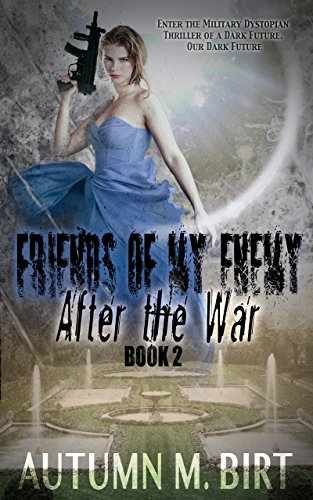 Book: After the War (Friends of my Enemy Book 2) by Autumn May Birt

about this book: This book is one of those ideas with a set of characters that wouldn't leave me alone. The series started as a single novel that I hand wrote in one month - while working full time. I just couldn't get it down fast enough (which showed in my handwriting!). I signed up for a novel writing course after finishing it while wondering what to do next. And that is where I learned that I had a lot to learn. I shelved it and moved on to an epic fantasy trilogy that became my first series to be published.

But in the back of my mind, this story was still there. And it kept growing. So as soon as I finished… actually, that isn't correct - BEFORE I finished writing the last book to my epic fantasy trilogy, I began writing short stories set before the original novel. I've learned that those "before stories" are a great way to get a strong feel for characters and events that built into a novel. Oh and were they ever. I understood motivations that hadn't been fully fleshed in that original hurried manuscript. How dark the world became made sense - like why the USA wasn't in the picture and the novel was centered in Europe, how Arinna managed to lead Europe's military while not technically being a part of it, and why she just didn't get along with those seven ministers who secretly were running the continent.

With all of that backstory (available in Stories for the War if you want to check it out), writing what I thought would be two novels based on the original one became an obsession, especially when a main character made a perfectly understandable decision (that I didn't see coming) at the beginning of book 3 (it will be out September 2015, so I won't give details away). That choice sprang this into a four book series that still amazes me that I wrote it. I couldn't have without the great cast of characters that led me into places I never considered going with attitudes that wouldn't take no for an answer.

The story took so much of my mind and attention that I wrote the three main books in six months. This time I did a much better job than that first hand writen idea - whose plot I barely followed after I got going. My husband got barely a reply and only burnt dinners for quite awhile. Such is what being married to a writer entails!

That might be why I'm passionate about this book, but it isn't what the story is about. Set in the near future, After the War begins after an apocalyptic war ravages first the USA and then across the world, embroiling Europe in a fight for freedom - one that they barely win and only at great cost. With peace reigning, rebuilding has begun and life is being restored, even if to survive the war with some dignity many throwbacks to a more Victorian era have developed (redeveloped?).

But peace is not what it seems and trouble is closer than imagined. For Arinna Prescot, a war heroine and unsanctioned leader of Europe's Grey Guard, growing problems threaten both her life and her protection of Europe. And Europe still needs her protection.

You don't have to read Stories from the War, book 1 of Friends of my Enemy, to begin this dystopian thriller. Start with After the War, book 2 and jump right into the series!

Oh and the name, Friends of my Enemy, it is based on the old (as old as Sanskrit!) saying "A friend of my enemy is also my enemy." Knowing who are the friends and which are the enemies is the difficult part...