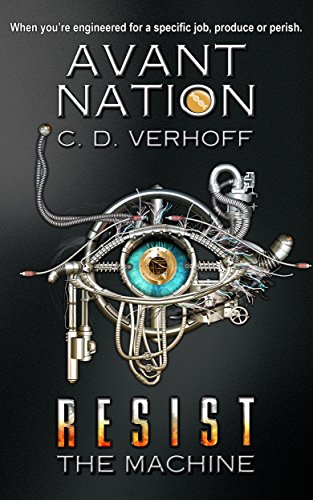 about this book: This book was inspired by a short story I wrote called Together, set in the very near future, when clones are grown for spare body parts. A young woman's life is turned upside down when her clone unexpectedly wakes from its drug-induced slumber, intent on fulfilling its purpose. I never published Together, but it helped me come up with concepts behind Avant Nation. However, the two stories are quite a bit different.

For starters, the events in Avant Nation take place more than a hundred years after the short story. The novel is set after the Second Civil War, in a new nation called Avantica, where all of the citizens are clones, each slightly tweaked to be different than the other. In Avantica, people aren't born, they're conceived and grown in factories until they're ready to enter the workforce. The main character, Clara Spinner, has been engineered for a job in the medical field. She simply accepts that the Avant lifestyle is superior to the old ways until a series of disturbing events leaves her questioning everything.

Mature issues concerning reproductive freedom and government-rationed healthcare come up in the book, so I don't recommend it for younger readers. Also contains violence, sexual situations and a little bit of profanity. For ages 16 and up.

• "A fascinating example of dystopian world-building, this book is an engaging and fast-paced adventure. The writing is clear and compelling, the characters are relatable and the story, well the story kept me reading to the early hours of the morning. For the first time in a long time, Avant Nation was a book I just couldn't put down. In the world of dystopian YA fiction, Avant Nation, could place with the Hunger Games trilogy and the Maze Runner series." — Cassandra at Goodreads

• "Avant Nation is one of the best YA books I have ever read. I loved the writing style and the plot. Everything about this book was thrilling." — The Bohemian Housewife: Blogger and Reviewer