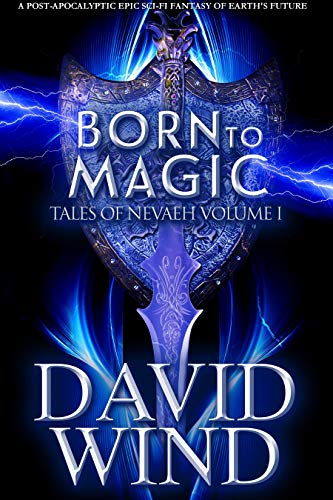 Book: Born To Magic - Tales of Nevaeh - Volume I by David Wind

about this book: Dystopian in nature, Born to Magic is a combination of sci-fi & fantasy and takes place 3000 years from now in a world changed by radiation. America, which is known as Nevaeh, is both a physical world and a paranormal world.

Born To Magic grew from my thoughts of how terrorism is growing in our world, of the bigotry and racism that is so prevalent today, and what would the effects be if the terrorists resorted to nuclear terrorism.

Welcome to Nevaeh — A world where technology no longer exists, but magic does — It used to be called America.

The story follows eighteen year old Areenna, daughter of the king of Freemorn, and a girl/woman of extraordinary powers. At sixteen, after the death of her mother, Areenna became her father's chief advisor. It will be Areenna who is to be called to help save Nevaeh and the world from its final apocalypse by joining with Roth's son, Mikaal, who is the first male in Nevaen history to have a 'woman's' power—due to his parents, a powerful sorceress and his un-mutated father.

During Areenna and Mikaal's adventures to discover their special powers, they battle the Black Sorceress and her evil creatures as they make their way to the 'Island' which is `the oldest and most powerful place of magic' in Nevaeh. There, they are tested to determine if they are worthy and if they are the ones who have been prophesied. When they have passed the tests, they are gifted with extraordinary powers, but, they are also charged with a mission, a quest to find the way to defeat the Dark Ones, before it is too late. (Book Two)

5-stars: 'A dystopic fantasy with a feminist twist ... David Wind has penned a classic fantasy quest and a fabulous first installment in what promises to be an epic series.'—Lisa Higgins, Award winning author of Random Acts of Kindness

5-Stars: 'David Wind's Born to Magic showcases a master storyteller's ability to create a world and breathe life into it with compelling complex characters.'—Jeff Gunhus, best-selling author of Night Chill

5-Stars: Enchanting and simply irresistible!...This book has astounded me.— Effrosyni Moschoudi, Author of The Lady of the Pier: The Ebb

Born To Magic is suitable for all readers 17 and older.