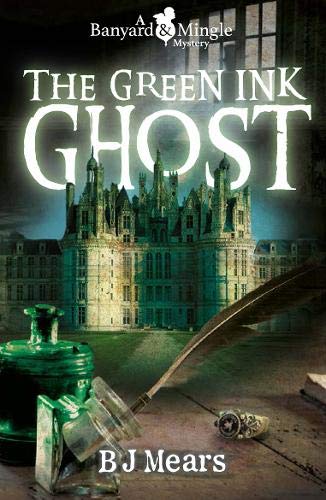 Book: The Green Ink Ghost by B J Mears

about this book: This is the 2nd Banyard & Mingle Mystery and follows on from 'A Sock Full of Bones', charting the private detectives' progress as they dive headfirst into another murder investigation. It all begins when Michael Banyard receives an anonymous letter informing him his father's death was not by natural causes, rather murder.

Banyard can do nothing but investigate, beginning, as the letter suggests, at the grave of one Willard Steeler.

I truly loved writing this book. It is full of twists and turns and features a colonoscope of venues.

The Blurb:
Following their success recovering King Doon's bones, Banyard and Mingle's services are in high demand. But when a mysterious green-ink letter claims Michael's dead father was murdered, he is compelled to reopen a long-forgotten case, Pursuing clues to a powerful, clandestine order and a missing young woman, the duo confront vengeful enemies and shocking truths and then there's Willow, a runaway slave, who bursts back into Josiah's life with deadly effect! With gawpers haunting and a murderer closing in, can they survive long enough to see the case through? And if the green ink ghost is revealed, will it be too late for justice to be done?

"This classic thriller set in a post-apocalyptic world, reminiscent of Dickensian London, is a real page turner. The characters draw the reader in to the class divide between the silkers and the threaders, and after a few pages you are there on the streets of Old Camdon with Michael Banyard and Josiah Mingle as they attempt to unravel the information they are receiving from a mysterious letter writer. The vivid descriptions of the surroundings and people allow you to stand alongside the private investigators on every step of their earnest, funny and soul-searching, quest for the truth. Prepare to be taken on a well-written, winding road through the incredible imagination of Ben Mears." --Julian Roderick, teacher, author of The Felix Jones Adventures

"In The Green Ink Ghost Ben has created a fascinating world, rich in detail and intriguing characters. A mystery to be solved indeed!" --Dan Sefton, Screenwriter (The Mallorca Files, Trust Me, The Good Karma Hospital and many more)

"Ben Mears goes from strength to strength as a writer and storyteller. A voice that latches on to you and doesn't let go until the end." --Dr Alistair Sims, bookseller and Publisher

Other books by B J Mears