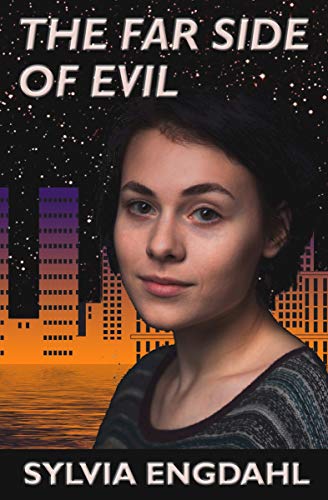 Book: The Far Side of Evil by Sylvia Engdahl

about this book: This book was written immediately following my Young Adult novel Enchantress from the Stars (German edition Wachterin der Sterne) when that book had been accepted for publication but had not yet appeared. Both books were intended for readers of high school age, but Enchantress from the Stars also appeals to somewhat younger readers, and after its publication in 1970 it became a Newbery Honor Book. Ths of course was happy news and greatly increased its sales--it has had many editions and is still in print--but it doomed The Far Side of Evil to obscurity. I have spent the past 49 years trying to publicize the fact that it is NOT a sequel.

Not anticipating that Enchantress from the Stars would be given to readers below teenage, I used the same heroine in both books, with the second being about her whe she is already a college graduate, although the two stories are otherwise competely independent and take place on different planets. This was a mistake I have always regretted. It meant that the publsher promoted The Far Side of Evil as a sequel to an award-winning children's book and for commerical reasons marked it "age 10 to 14," although actually it's not suitable for readers under 14 and although originally issued as a YA book it's enjoyed by adults. Most of the younger readers who went on to it didn't like it; they found its dicussions of the issues with which it deals boring and some of its subject matter--torture, imminent nuclear war--depressing or even disturbing. Yet the older readers for whom it was meant didn't discover it because it was labeled a sequel to a children's book. So despite excellent reviews--for example, the London Times called it "gripping psychological science fiction" and Publishers Weekly said it has "a forceful style that sparks the reader's imagination'--it wasn't widely read.

In 2003 a dfferent publisher, having recently brought out a new edition of Enchantress from the Stars, issued a new hardcover edition of the Far Side of Evil, in which I revised some statements that were out of date (although the story itself, contrary to some readers' misinterpretation of its theme, is in no way outdated). Unfortunately, the same thing happened. Though I talked them out of using the word "sequel," they nevertheless promoted it as related to a well-known "children's book" and again it wasn't found by the audience most apt to enjoy it, so it was not a commercial success. As soon as I got the rights back I issued my own ebook edition, and later a paperback. Now it's not being found because there are so many science fiction novels on Amazon that it's rarely seen.

This novel means a lot to me because it deals with an issue I care deeply about--the vital importance becoming a space-faring species. I got the idea for the story way back in 1956, the year before Sputnik, and was overjoyed when Sputnik made iit impossible for the book's setting to be Earth. The fact that it's a fictional planet doesn't detract from its theme, which I believe applies to all inhabited planets that may exist. In my opinion a plsnetary civilization either expands into space or is wiped out by nuclear war or some other disaster; there is no third alternative.