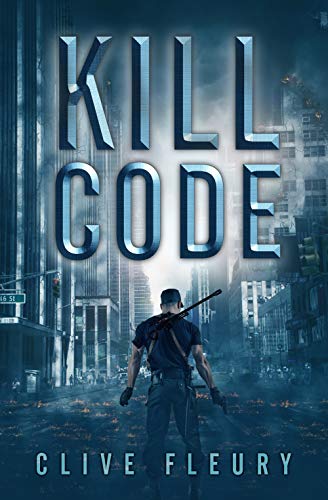 about this book: My book's called Kill Code: A Dystopian Science Fiction Novel, and that makes its genre clear–sci-fi. It's daunting writing a book in a genre where so many great authors have gone before but I chose it because it allowed me so much latitude. I wanted to tell a tale about today, or at least where today could take us–about a world where the ocean has drowned great swathes of the land, and the heat of the sun has turned much of the earth into a desert. And it's a place where there is no middle class, just a tiny percentage who are extraordinarily rich, and the rest can only just survive. I wanted to write a book too about a hero and a heroine, about a man and a woman fighting to find the truth–but I wanted too to create a narrative with countless twists and turns so that just as you think you've worked out what's going on you're thrown a curve ball. It was a story I started thinking about a few years ago and finally pushed myself to write about nine months ago, and boy was that hard! This is the first book in a trilogy, and though I know where I'm going with it I've still got a lot of hard work to do before I finish the series.

Does it work? Is it entertaining and thought-provoking? Well, you judge for yourselves but other people do seem to like it. Here are a few quotes from reviews:

• "A thought-provoking take on a dystopian future."

• "This is a fast-paced book that is hard to put down, with high stakes that test the characters mentally and physically to the limit."

• "I was unsure if I would be able to get into it because it's not my usual genre. I was pleasantly surprised that I couldn't put it down."