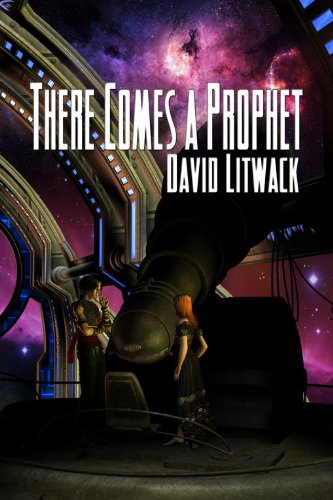 Book: There Comes A Prophet by David Litwack

about this book: Where did the idea for There Comes a Prophet come from?

I was walking along one of my favorite beaches near my home on Cape Cod. To my right was Martha's Vineyard rising up from the mist and to my left were inlets common to the Cape's ragged coastline. The first and smallest was called Little Pond, with just a few homes around it. The next was the much bigger Great Pond. For some reason, I started imagining a young man, who'd grown up in the smaller village, feeling limited and wanting more from life.

I had my protagonist. Now I needed the circumstance that was keeping him from attaining his goal.

The news of the day was filled with stories about the rise of a fundamentalism that distrusts science and is adverse to modernism. Yet these same folks were quick to use cell phones and computers to further their cause, and the first to seek modern medicine when they became ill—all technologies that would never have come about had their ideologies prevailed.

I recalled the Arthur C. Clarke quote: "Any sufficiently advanced technology is indistinguishable from magic." What would a smart phone, flat screen or other modern device look like to members of a more primitive society? How might these technologies be abused in the wrong hands?

I had my story, but one last piece was missing.

One of the greatest things about being an author is the ability to make the reader feel the kind of emotion people only feel a few times in their real lives. To achieve that, I had to make the reader believe that the characters' actions are important to them, that something profound is at stake.

For each of my main characters, I identified what they cared about most. For Nathaniel, adventure and a desire to change the world. For Orah, the search for truth and knowledge. For Thomas, music. But what drove them above all was their friendship.

All these concepts came together—a young man limited, a society that limited him, the power of technology as magic, and three friends deeply committed to each other—and the dystopian fantasy of There Comes a Prophet was born.

Video: There Comes A Prophet by David Litwack