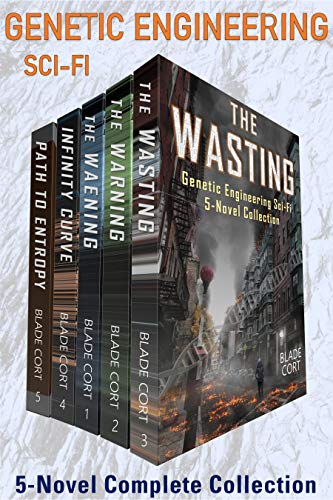 Book: The Wasting - Descent to the Cataclysm (Over the Precipice Book 3) by Blade Cort

about this book: Human technological prowess accelerates at a logarithmic pace, while societal progress atrophies. Sounds like reality - and the makings for a great story...

By 2037, can humans grow tails or manes? Connect their minds directly to AI clouds? Slow or reverse aging? Consider the last decade, then think again - it's coming, and too quickly.

Humanity faces an "Infinity Curve" challenge - where technology rockets up the Y-axis, enabling almost anything imaginable. Meanwhile, our social progress degrades along the X-axis of time.

The Wasting Trilogy Collection was borne from this imminent XY conflict. An obelisk crashes to Earth and warns of possible alien attack. That would normally be enough to shock humanity - not only are we not the universe's prime species, but these aliens might easily annihilate us.

But it gets darker. It's 2037, and DNA is just another programming language. Humans are rapidly hybridizing, while non-hybrids cower in fear, bigotry and bias. The world only needed one more drop in the maddening lake of human turmoil for the dam to burst.

Follow The Wasting's protagonists - Peter Scott, a science podcaster, and his cohorts Molli and Ears as they grapple with global upheavals in their own way, interviewing controversial experts with proposals to defend Earth's inhabitants.

Just one problem, though. Somebody doesn't like their subject matter and will kill to make them stop.