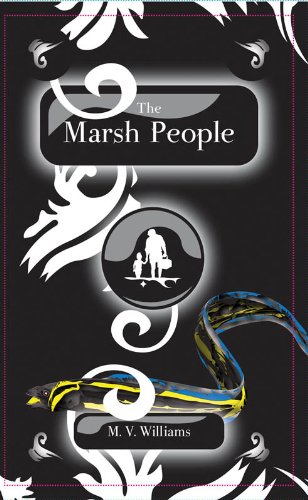 about this book: 'The Marsh People' by is a novel of 80,000 words about a group of people who try to survive outside the shelter of the City, on the land around the estuary.

Dogs have rounded up the villagers and herded them into the teeming, inhuman City to work, under the control of the MASTERS, who are interested in a survival gene and who monitor their progress.

SCUMMO, a young working man, finds orphaned KELPIN abandoned and escapes with her from the City. Kelpin has the survival gene. They find DARFI, another runaway, who lives on a barge and gives them shelter, teaching them to fish, and they meet up with a group of other survivors. There are flesh eating eels and the Masters' dogs to contend with.

The starting point for the book came from some psychological research, where dogs were placed in wire cages and although fed and watered could not leave and received a mild electric shock if they touched the sides. After a period of time, the lids of these metal cages were removed. Most dogs, afraid of the outside world, stayed in their cages where their food supply was located. A small number, however, jumped out of their cages and preferred the uncertainty of freedom. Survival to them meant more than food and shelter. This idea intrigued me. Emotional survival is clearly about jumping out of the nest and taking a risk.

Applied to humans, I felt it would be a good starting point for a novel set in an unspecified time, when humans are crowded together, monitored and given basic necessities in return for work. They would have little free will, no joy, no real relationships and no creative outlets. How could they cope on the outside?

People on the margins have always fascinated me. Having been poor myself I have learned to be resourceful and self-sufficient. I have used some of this learning in this book.

The Marsh People takes us on an exciting and uncertain adventure into the margins of society, where danger is constantly lurking. The survivors who leave the City have to revert to a near Stone Age way of life in a land that is horribly altered by The Masters, who have taken over and destroyed the villages and herded the inhabitants into cities. What is freedom without enough food? Which is more important, survival of the soul or the body? These survivors opt for the former and have to face the consequences, learning that cooperation and kindness are crucial to their survival, while force sometimes becomes a necessity.

Read by survivalists, readers of dystopian fantasy, and outsiders.