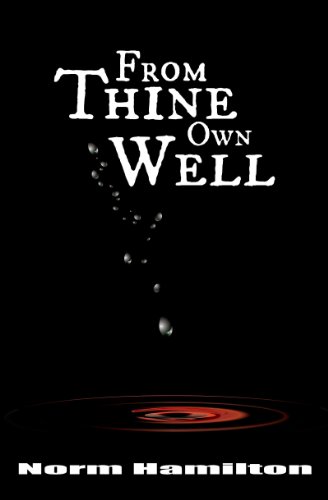 Book: From Thine Own Well by Norm Hamilton

about this book: Enter a dystopian Canadian society that reviewers agree is frighteningly feasible. Corporations control the government. Deaths and destruction result. Fracking and irresponsible mining contaminate watersheds and citizens have lost their rights.

This futuristic account is for those who enjoy fiction that is believable, interesting and exciting to read. There are no werewolves, vampires or zombies; but the premise, characters, and scenes are authentic—conceivable. Be drawn into the lives of both the protagonists and the antagonists … delving into the human side of both.

Inspiration for this story came when the Canadian federal government entered into Foreign Investment Protection Agreements containing the option for corporations to sue Canadian government(s) if regulations or rules interfere with the corporation's bottom line. At the same time the Yukon government encouraged foreign corporations to take over mining operations in the territory. This combination caused me to wonder, "What if?"

This book is the culmination of a year's worth of research, drafting, rewriting and editing. Rather than simply moving forward on my own fears and biases I learned, through statistics and from the reports of people affected by the process, the dangers of fracking. Studies show what could happen if the companies didn't adhere to regulations and safe practices.

The knowledge gained creating this novel confirmed for me that prudence is necessary in the management and extraction of resources. The world, as we now know it, requires mining and oil and gas exploration. However, bringing these commodities to the market cannot be done at the expense of the environment—we must find better ways of obtaining them. The corporate bottom line should not be the driving force behind decisions. Balance in all things is required.

Without potable water and food, all the profit margins in the world are for naught.

Video: From Thine Own Well by Norm Hamilton