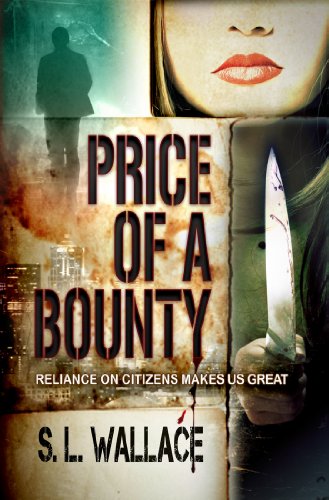 Book: Price of a Bounty (Reliance on Citizens Makes Us Great!) by S. L. Wallace

about this book: What if your parents died when you were young? What if you were raised by an aunt who didn't want the burden of children? What if she kicked you out as soon as she could? Who would you blame? How would you cope?

Keira, April and Scott were raised by their bitter aunt from the time they were 8, 6 and 12 years-old. When each came of age, they found different ways to survive in a future society, split by class warfare. Scott gave up his freedom to become a soldier working for the government he blames for his parents' death; Keira became a freelancer, a hired killer who believes she is helping society by ridding it of the people she holds responsible; and April went to work as a maid, serving a man she despises.

Then we meet Guy Bensen, a member of the Elite who breaks all the rules. His goal, to close the Divide between the classes and stop the corruption. With people working together, there is still little chance of success. But there is always hope.