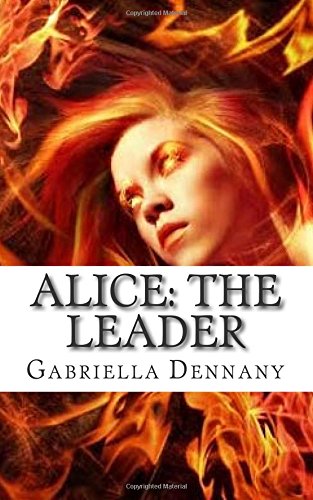 Book: Alice - The Leader (The Chronicles of Alice) (Volume 1) by Gabriella Dennany

about this book: The United States of America has been completely transformed into a dystopian country, with walls surrounding every state, keeping the citizens in. People with unusual powers began to show up years ago, right after a lab explosion in Dallas, Texas, spreading harsh chemicals around the state and into the citizen's cells. Soon enough, a new species known as the Chemi-Terrorists became known to the government.

Alice Rosemarie Lee lives a normal life in New York with her older brother, Eric. The walls surrounding her home didn't seem to bother her at all, nor did the frightening Mist that could make anyone forget anything. But on one normal evening, Alice was out after the state curfew, when the Terrorists roam the streets.

After a startling encounter with two Chemi-Terrorits, Alice's world get's turned upside down. Her only family has been taken away from her by the government police, and for some reason, she seems to be...different. A young man comes to her aid, bringing her to the hideout of the Terrorists -- since it seems as though everyone was out to kill her.

As the world begins to crumble at the hands of the government, the Chemi-Terrorists take it to themselves to lift it back up with a rebellion -- where every man and woman, human and inhuman, could live equally and freely. Alice takes up the stand to become their leader, but she doesn't fight for freedom, she fights for her brother's freedom -- since he is the only family she has left.

I strive to show the world that no matter how old you are, anything is possible. I wrote this novel when I was in the eighth grade, and since then, I have never stopped writing. My theme is: no matter how dark the moment, love and hope are always possible. This theme is important because it is a way of living. If every person had this saying in their minds throughout their lives, then everything for them could become so much easier to handle.

Video 1: At 14, Gabriella Dennany of Palm Coast is a published novelist. Her first book, "Alice: The Leader"
Video 2: Alice The Leader Book Trailer