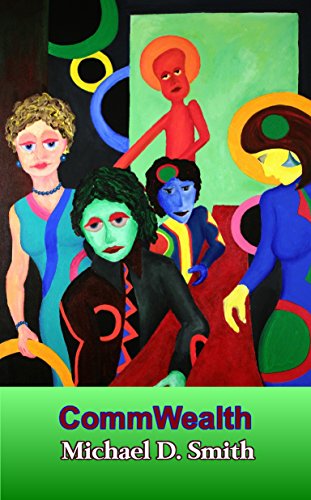 about this book: Introduced six months ago, the CommWealth system has outlawed private property. As the story opens, playwright Allan Larson is walking in the rain, spies a new Porsche, and demands the owner relinquish the car. By law, the owner must comply. Everything is free in this society. You just ask for it. To avoid subtle retaliation, there's a thirty-day waiting period before the former owner can ask for anything from the new owner. People do try to hide as much of what they've got as possible, but they're castigated as Hoarders, and surprise inspections of homes, and publications of people's inventories, are common. Often you're called up at night and asked for several of your items, with instructions on where to leave them for pickup.

Allan has adjusted well to this new society, easily claiming umbrellas, mansions, and motorcycles from fellow citizens. Still obsessed with his ex-girlfriend Lisa after their breakup, Allan invokes the laws of CommWealth to demand ownership of her. Meanwhile bicycle mechanic and fledgling actor Richard Stapke seduces Jill Constantine, co-owner with her husband Steve of the Cup of Fog coffee shop, headquarters of the theatrical troupe Forensic Squad.

After a drunken Richard discloses that he's secretly been writing novels and plays for years, Allan incautiously spreads the word that Richard's a genius. But an official CommWealth claim is made of Richard's entire literary output, and the resulting five-volume Stapke Intimacies not only reveals Jill and Richard's affair, but brings to light a twisted history of betrayals, double agents, and murder that propel Steve Constantine and other Forensic Squad members into a suicidal revolution.

The idea for the novel came from a dream. Allan was the main character seeking to fulfill his fantasies about his ex-girlfriend Lisa, but he also had various adventures as a detective in Australia--none of which made it into the novel. For a long time I called this novel Property and I sent out numerous queries on it until I realized that the book needed some serious revision. I changed the title to CommWealth after seeing a novel called Property in a bookstore and realizing how common the title is. Library work had also shown me how often the same titles are appropriated, for instance Flashpoint with dozens of novels by that name. Although of course you can never guarantee total uniqueness, I was determined not to recycle trendy-sounding titles for any of my novels. "CommWealth" implies "property" as it heightens the totalitarian nature of the bureaucracy the characters must cope with.

The cover is a painting I did of the main characters meeting in the Cup of Fog coffee shop, headquarters of the acting troupe Forensic Squad.