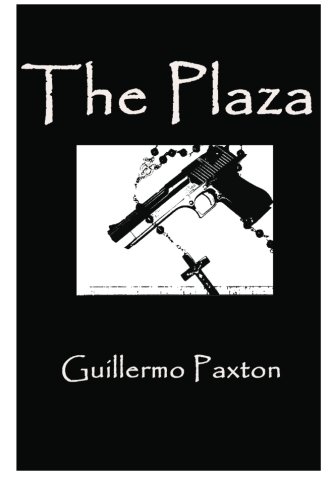 about this book: THE PLAZA is fictional based on the true events that occurred in the war-torn city of Juarez, Mexico from 2008 to 2011. Saul Saavedra is a crime reporter for a local newspaper that wishes to expose the corruption and horrific truth behind the drug war and is caught in the crossfire between the two warring cartels in Juarez. Juan is a recently deported criminal that soon finds a home in the Sinaloa cartel as a paid assassin, or sicario. Felipe is promoted in the ranks of the Juarez cartel, La Linea, and he falls in love with a beautiful prostitute who proves to be just as bloodthirsty as he is. THE PLAZA is about the drug war in Mexico, the corruption in its government and the horrendous effects it has on daily life in Juarez.

Guillermo Paxton and his family lived and worked in the city of Juarez. He based THE PLAZA on the events around him, the people he knew, and personal experiences. While doing research for the book, he put his life on the line and was even targeted by the federal police.
THE PLAZA was named for the territory that is under a certain cartel's rule, a certain area. The city of Juarez, and the state of Chihuahua, is the plaza that the Sinaloa and the Juarez/Zeta cartels have been disputing over the last several years.
The drug war in Mexico is a failing initiative and has only served to strengthen the Sinaloa cartel and weaken the overall stability of the country.

A Horror Story That Is Real

When I picked up "The Plaza" from Amazon, I was intrigued because the author is from the city of Juarez in Mexico. When I lived in Las Cruces as a child we used to go to Juarez for candy and pinatas and to eat. I still have family in Las Cruces and they only cross the border occasionally these days.

I couldn't put the book down. I wanted to stop reading so I could get some homework done (I'm in college) and I didn't. I read that it is based on things that really happened in Juarez and have no doubt of it. I was crying through several of the scenes and my mom asked me what was wrong. She said that I was being silly. I lent her it after I was finished and she said that she cried too. We both agreed that it left us emotionally drained.

Mr. Paxton shows in "the Plaza" a side of the so-called drug war that I don't think Americans really understand. Seeing the awful stories on a brief news spot is one thing, but he put me in Juarez and made me feel like I lived there. He made me care deeply for Saul, the reporter, and for that I don't forgive him!

The sign of a really good book is that it sticks with you even after you have finished it. "The Plaza" is still on my mind, three weeks later. I am not the type to do a review, either. But "The Plaza" is an important book and needs to be read. Even if you are not interested in the drug war, even if you don't care what happens to our neighbors in Mexico, read this book because it portrays the vast differences of humanity and what humans are capable of doing to each other, and because it is a really good novel. Mr. Paxton, if you ever see this review, I look forward to reading your next novel, and I sincerely hope that there is one. [by Cindy]