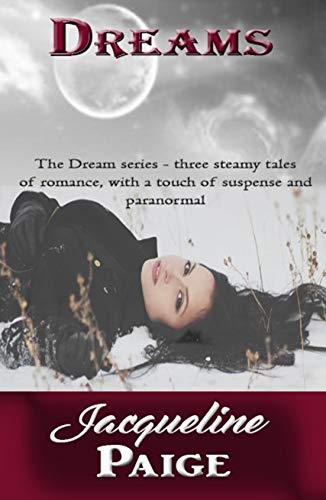 about this book: Originally this was written as a single novella story. After finishing it, I realized it wasn't done, but didn't have time then to take it
any further. When I did find the time, there were two more novella length stories that completed the Dream series.

Jennah Best left the adrenaline packed life of being a cop on the edge for a more peaceful place. She escaped a marriage that almost destroyed her and now lives her life working for a small police station in the town of Ridge. At her age, she's accepted that it's too late and too much work to start all over again, until she meets a man in a dream...

While young, Dominic Palmer has always proven he can get the job done. Or at least, that was the case before he accepted a job and agreed to go undercover as an inmate. When months go by and there's no word from his outside contact he wonders if he's been left on the inside for good. He's fighting to stay alive and keep his sanity, but finds himself completely distracted by a mysterious woman he met in a dream...

Jennah has found happiness. She wasn't looking for it but isn't about to give it up now that she has it. Everything she craved for years was now right in front of her--a man that makes her feel cherished, a peaceful life, and a job she enjoys. It all changes when she wakes up in a dark hole, alone, unarmed and unable to connect with the one man she's grown to need.

Dominic realizes he is one of those men that wants the whole package of marriage and a family, and he's found the woman to have that with. He's going stir crazy having to stay hidden until the leader of a criminal organization is caught, but he's more than willing to stay right here with her. All of his plans evaporate when a vindictive criminal takes her from him as a hostage. He won't rest until she's in his arms again.

Feeling less then worthy as a normal man surrounded by a team with special skills, Brody has to wonder why he's a part of it. If it weren't for one team mate being there, he'd transfer back to normalcy.

Tess has always felt like a freak, even surrounded by others that are different she still feels like an outsider. Only one of her team mates make her feel like an everyday person.