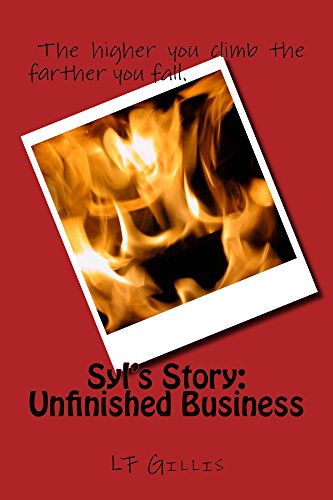 about this book: I grew up at a time when all the heroes seemed to be men. As a girl, I had very few role-models other than my mother. She was great, but I was looking for someone larger than life. My turning point was when I saw professional wrestler, The Fabulous Moolah, on television. To me, she was a force of nature. Tough, strong, and not afraid of what people might think of her. Later in life, I found out she was just a woman trying to portray an image and make a living doing it.

Syl Felix, the heroine of "Syl's Story: Unfinished Business" reflects that type of life. Born into an abusive, poor family, her life is given direction courtesy of her loving, but stern grandfather, Cal Felix, who took her in after an altercation with her mother, Doreen Felix. We never see Grandpa Cal, but his presence is felt throughout the series.

We first meet Syl on her last night in LA. She is about to retire and wants to do it as the women's world champion.

From here on out, the novel is all about Syl confronting her past and trying to find her future. She returns to her grandpa's farm just outside Valdosta, Georgia. Fate steps in, and Syl bumps into her first love, Hank Washington. Conversation ensues, and revives glimmers of the old feelings she thought were long buried.

Hank is now divorced and owns a local nightclub called Hank's Joint. He invites her to his bar for a drink, but Syl doesn't want to be in such an environment until her injuries have healed. After all, for the past 15 years, she's been fighting hard, and partying harder. But she still wants to be around him, especially, now that she knows he's divorced. She invites him to her place for coffee and conversation after his bar closes.

That night, Hank's Joint is busier than ever. Hank stumbles into his bed forgetting all about his coffee date.

Having waited for Hank most of the morning, Syl's temper comes out, and she decides to put him out of her mind and move on. She is further upset, when she finds out her career-long manager, Jerry Sims, is now managing Ivanna Franks.

It takes weeks to recover from her injuries, but she is finally ready to find some male companionship. Hank's Joint isn't the only bar in town, but the others don't hold Syl's interests.

Watching Syl drink and talk with multiple men, Hank's jealousy and arousal gets to be more than he can handle. Especially, since his best friend, Bill Denali, is one of the men swooning over her. As business slows down, and Syl gets drunker, Hank cuts her off. He runs off her latest potential suitor and asks for a dance so he can explain why he stood her up. Syl isn't about to make things easy for Hank. The lights are low, the dance floor is crowded, the music is slow, and their bodies are close together.

After a rocky start, and some private conversation in the storage room, Syl agrees to go home with Hank. They get to know each other all over again. He doesn't want her to leave, but a night has turned into three, and Syl needs to figure out what to do with her life. The day she leaves, Hank informs her that before the end of the year, she will become his wife.

Syl laughs at this notion. Her parents weren't happy together, and her mother took it out on her. With some renovations done by local construction owner, and Hank's best friend, Bill. Syl turns her grandpa's old barn into a gym she calls Sanctuary Boxing. She always considered the hayloft to be her sanctuary from the rest of the world. Her and Hank's relationship develops, and she begins to think maybe she can have a "real life" with a man.

Hank's son, Kyle, who runs his school's sports blog, and a sports reporter from California called, Stu Grimes, have boxing fans questioning whether Ivanna Franks shouldn't have been disqualified during the fight. Video has gone viral showing Ivanna as a rule breaker. They're calling for a rematch.

A rift is caused between Syl and Hank when Ivanna's work visa expires and Syl is appointed interim champion. She takes on her best friend, Angelina Castillo. A broken nose delivered to Angelina, by Syl causes friction between her and her friends.

Ivanna's legal troubles are settled and a fight is set between her and Syl on the anniversary of the night she nearly killed the world champion. Will Syl settle her unfinished business?

Two years of boxing research went into this novel. I knew virtually nothing about women's boxing, and was surprised by how little accurate information was out there. I haunted WBAN.com. But still, the hardest part was getting the emotions deep enough. I'm still not sure I'm there. Even in fiction, there has to be a certain level of raw honesty. It took me years to get it good enough for publication. The title was the easy part. Unfinished Business is a popular title, but this is Syl's Story. They came together like puzzle pieces.

The cover was totally unexpected. I pictured Hank and Syl standing together. But the more I looked at other covers, the more they all seemed the same. This book is nothing unlike anything I've ever read. In fact, some of the people in my crit group thought Syl was too masculine. Fortunately, others were able to see past the hot temper and loud mouth, to the tender heart beneath. An unusual heroine had to have an unusual cover. During the final fight in the novel, Syl sings threats to Ivanna. One passage goes, "The flames of Hell will be risin' high, then you'll feel the heat." Heat is referenced throughout this novel. Syl's boxing garb is black and red. Flames seemed to be the most appropriate cover.

What did I learn from this writing this novel? I think I learned how to write, while writing this novel. It started out, as one critter described it, as a movie script--all dialogue and action. I wanted something more. I was challenged to cut past the who and what, and get to the why. Nobody does anything without a reason. That was the part I had to learn to write.

To anyone who may read this novel: It won't change your life. It's not supposed to. But I hope, on some level, Syl and Hank become your friends. They aren't perfect. They won't ever make the president of the PTO and neither will the people around them. But I hope all those flaws makes them human. I don't want you to read about them. I want you to get to know them. There's a tear-jerker ending.

Thanks for reading.
Linda