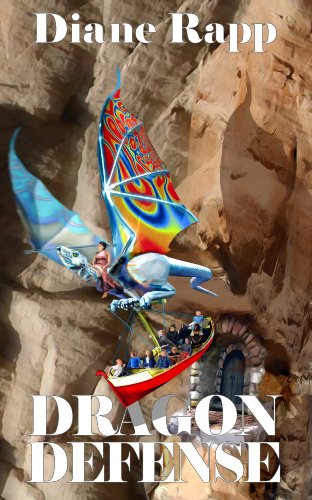 about this book: DRAGON DEFENSE is a tribute to Anne McCaffrey, who passed away at the age of 85 in 2011. I fell in love with her Dragon Riders of Pern that inspired me to write science fiction. I don't claim my book compares to McCaffrey's gems, but I believe she'd enjoy another dragon story. Like any writer who populates a world with dragons, my dragons have their own unique characteristics.

In THE HAVENSHIRE RESISTANCE I introduced Flash, a baby dragon, whose mother was killed by a large white eel. Flash was raised by telepathic humans, Felesia and Jordan. My favorite scene shows them coaxing Flash to fly for the first time. She's inside a cave with a strong updraft and leans into the wind with her wings stretched wide. She trembles, afraid to jump, but Arrow (the hawk) demonstrates how a bird hovers overhead. Can you imagine the scene? Flash eventually flew and helped her human friends attack an evil enemy in battle.

On Drako dragons are an intelligent species. Colors ripple through their wings in specific patterns, and the dragons communicate during an organized hunt. Don't scoff at the idea of a dragon sending ripples of color across its wings? We have a perfect example on Earth of a similar phenomenon. A Flamboyant Cuttlefish moves layers of skin cells to send pulses of color through their bodies.

Meet the dragons of Drako in DRAGON DEFENSE. Can they help their human friends survive an attack from space? Fremont, an enemy from the Institute is determined to find the crew of the Zebulon and exact his revenge. Donovan is faced with an aging planetary defense system and superstitious subjects. Can they train the teenage sons of lords to operate banned technology in time? Will the dragons give them an edge when they confront the enemy? As the clock ticks a destructive countdown, everyone must band together to defend their planet. (I hope Anne McCaffrey would enjoy this dragon tale.)