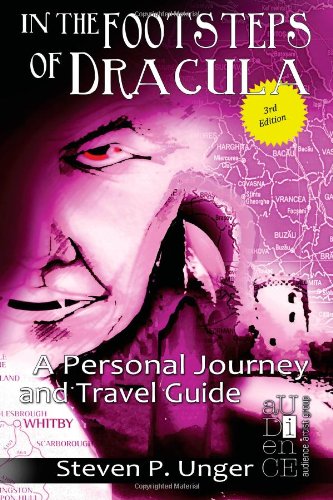 Book: In the Footsteps of Dracula - A Personal Journey and Travel Guide by Steven P. Unger

about this book: My obsession to travel to every site related to either the fictional Count Dracula or his real historical counterpart, Prince Vlad Dracula the Impaler, grew out of a visit to Whitby, England, where three chapters of the novel Dracula take place. I stood on the cemetery hill where, in Bram Stoker's Dracula, Lucy Westenra and Mina Murray spent hour after hour sitting on their "favourite seat" (a bench placed over a suicide's grave near the edge of the cliff), gazing out toward the "headland called Kettleness" and the open North Sea beyond—while Count Dracula slept just beneath them. In my mind's eye, I could SEE the un-dead count rising at night from the flattened slab of the suicide's gravestone to greedily drink the blood of the living.

of a suicide looks the part that it plays, with its weathered limestone tombstones blackened by centuries of the ever-present North Sea winds. That graveyard made the novel more visible, more visceral, to me, and I wondered if the sites in Transylvania and in the remote mountains of southern Romania would evoke the same feelings. As I was to discover—they did.

At that moment I decided to visit and photograph every site in England and Romania that is closely related to either Bram Stoker's fictional Count Dracula or Vlad the Impaler—to literally walk in their footsteps and to write a book about my experiences.