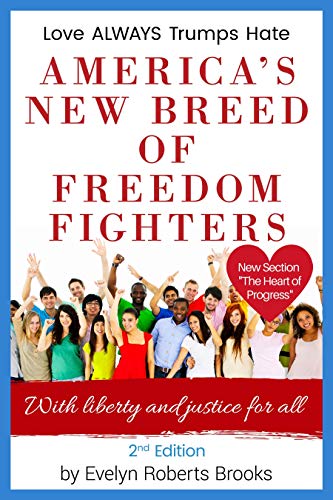 Book: America’s New Breed of Freedom Fighters - With Liberty and Justice for All by Evelyn Roberts Brooks

about this book: When I woke up on November 9, 2016 to the stunned reality of Donald Trump's election as America's 45th President, I knew that I had to write a book to help my country survive the attacks he had planned against women, against health care, against laborers, the poor and the elderly. It's a long list, and he went swinging into action immediately. My plan was to release the book on Inauguration Day (January 20, 2017) and so I began writing at once. As part of this project, I wrote a daily blog countdown leading to Inauguration Day, and included those 31 blog posts in the book itself.

My purpose was to show Democrats, Progressives, Liberals and Moderate Republicans how we inadvertently contributed to Trump's election by coming into emotional alignment with the fear and anger that he manipulated towards his own end. As I write this memo to you, it is mid-July 2017 and the entire world is aghast at the destruction that man and his cronies have unleashed in wide-sweeping plans to benefit the super-wealthy at the expense of the common man, our environment, and our allies.

In this book, I offer inspiration and hope. I offer advice for anyone who wants to be an angel for progress and doesn't know quite how to begin. I offer, for your consideration, lessons in using the universal laws of the mind to create results that you want, and to be one of the "new breed" of Freedom Fighters who manifest progress by coming together and proving that Love Trumps Hate, every time.

This is Book One in my "Liberty and Justice" series, and I hope you enjoy all of them. The other titles include: "What Were They THINKING?: Inside the Minds of Trump's Voters" (political humor), "What Trump's Voters Were REALLY Thinking: The Complete Report, Unedited" (political humor), and "When They Go Low WE GO HIGH: How to Raise Your Vibration to Manifest What You Want" (dedicated to Michele Obama).