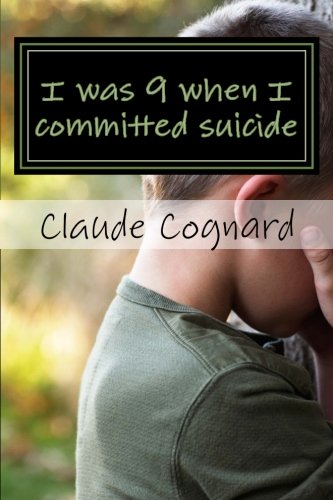 Book: I was 9 when I committed suicide - the way I grew up! by Claude Cognard

about this book: This book is about a child from his birthday to his nine years, and the way he experienced it. This could be the first part of a longer narration...

One of my friends, a French psychologist, led me to write this as we were talking and talking. She loved what he was speaking about, and she became sure, that this might interest many people. I wrote several books, some of them are sold through Amazon, other ones have been published by French publishers and may be found in booksellers' shops.

It took a few months, and our fist plan was to show how a man might grow from the state of childhood to a man deprived of machismo. I separated the childhood from the adulthood, and as I said, I am going to carry on my writing. As to the cover, it is one Createspace offered. I thought the picture of the young boy, was suiting exactly the way I figured him out.

I will not say, it was hard to write as what I had to say came up from the deepest part of my soul. Moreover, I have written a longer text in French, which I don't want to publish yet, because, my honesty, my frankness, might upset my mother, who will never agree on her having been so severe, so harsh, so hard toward her children. Above all, I am convinced that she acted badly, but with one single goal, our Good.

I made no research for this kind of book! It is only the way I remembered reality, my reality... and what I learnt, is that we must forgive those who helped us during our life, whether what they did, was good or not... I have learned that we construct our own vision of the past, and that the past may have been squarely different from what we imagine. And to end this, I should say, that past has to be forgotten, the only things that count, are here, in front of us, now... neither before, nor later... we cannot anticipate life! Life goes its own way, whatever we might decide;