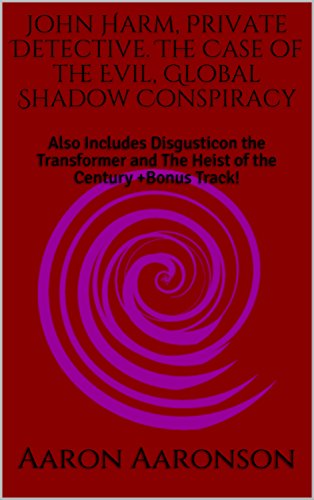 Book: John Harm, Private Detective. The Case of the Evil, Global Shadow Conspiracy - Also Includes Disgusticon the Transformer and The Heist of the Century +Bonus Track! by Aaron Aaronson

about this book: "John Harm, Private Detective. The Case of the Evil, Global Shadow Conspiracy", the first story of the book is actually a short novel. It is a parody following the exploits of private detective John Harm. In it John Harm is thrust into a case that has surprises around every corner and just when it seems he might be close to unraveling it there are twists and turns that bring him right back to the start and he realizes he doesn't have any real grasp of what is actually going on. John Harm's methods are unorthodox and some might question their viability and also maybe question if John Harm could figure out how to tie his shoe considering how inept sometimes his actions seemed. But they don't know the man, and he was determined to get to the bottom and solve the case or his name wasn't John Harm. "Disgusticon the Transformer" is a science fiction parody novella. It involves two warring factions of giant robots. Disgusticon goes on his journey to become the hero he knows he can be. Aside from being a parody of Transformers the novella also parodies other science fiction properties such as Star Wars and Dune. It also parodies the notion of NASA conspiracy theories. "The Heist of the Century" is a short story heist movie parody. Xavier Fletcher is preparing to pull off the heist of a lifetime. He plans everything out and the night of the heist goes down. Things don't exactly go as expected I'll just say. "Bonus Track: The Alternate Reality Normandy Beach Assault" is the last story of the book and it is, well, what it is and pretty off the wall. It is a short story that examines what the results would have been had a different person been leading the assault, and not to spoil anything but the results would have been very, very different. In terms of who the book would appeal to I suppose anyone who is interested in reading parodies of the mentioned genres. In terms of the cover there are so many different, disparate stories that trying to draw a picture that would encapsulate it would have been a jumbled, chaotic mess. I always do all my own covers but a painting wouldn't have fit the book at all so for this one I just kept it very simple and chose a basic image and I do think that better suits the nature of the book over other options.