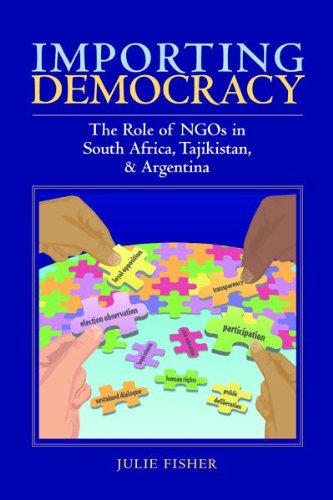 People often respond to this failure by assuming that many countries are simply not suited to democracy, at least for the foreseeable future. This book is about three countries where some citizens refuse to be so easily dismissed, and have already initiated the long, arduous process of democratization from within. They build on their own democratic traditions, particularly at the local level. But they also import powerful democratic ideas such as accountability and the concept of a loyal opposition. Some of these ideas are imported from the past. Indeed, any one of these activists could walk into Thomas Jefferson's parlor and engage in a debate with him about the contradictions between slavery and the democratic ideas of the Enlightenment.

Argentina, South Africa and Tajikistan all have viable civil societies. Within these civil societies, there are nongovernmental organizations (NGOs) laboring in the vineyard of democracy. These NGOs serve as the comparative lens for observing wider processes of democratization.

Iraq and Afghanistan not only highlight the failure to export democracy. They also remind us that elections, even if they can be made relatively honest, do not equal democracy. In fact, the organizations described in the book are engaged in everything from setting up community radio stations to teaching local police about human rights to strengthening civil society as a potential loyal opposition. The cover of the book shows many hands contributing to an intricate democratization puzzle that includes human rights, political participation, transparency, loyal opposition, legal reform and democratizing political culture.

While taking account of the impact on democracy of civil society, broadly defined, this book focuses on the more specific impact of democratization NGOs in South Africa, Tajikistan and Argentina. It is based on 103 field interviews, 84 of which were with the leaders of indigenous NGOs that focus primarily on a wide range of programs to strengthen democracy. These NGOs are working on everything from elections to public deliberation, from human rights to prison reform, and some strengthen civil society itself. While these deliberate attempts at democratization are at best part of a fragmented, long-term journey, their wide scope has achieved tangible democratic advances within both societies and governments.

Here are some of the things I learned from writing the book:

1) Democratic advocacy is possible even under an authoritarian government like that of Tajikistan.
For example, a coalition of Tajik NGOs successfully pressured the government to crack down on sex trafficking to Dubai.

2) Democratic reforms are easier to implement at the local than at the national level.

3) Despite the differences in these three countries, the people who lead democratization NGOs are remarkably similar to each other.

4) Democratization is a long, hard slog. But these people are very determined, and sometimes they succeed. An NGO in Argentina forced the parliament to hold open public hearings for Supreme Court nominees.

6) International donors need to do their homework and find out who is doing what and where, before they offer support to indigenous democratization NGOs.

In the long run, the security of the United States depends on the increasing stability of other countries. Stability, in turn, depends on the process of democratization, which gives people hope, even if democracy remains only a long run goal, difficult to achieve. I hope that, among my readers, there will be some policy makers.

Here are some quotes from early readers of the book:

• "Democratization has been a worldwide phenomenon, yet its theorization has largely been a Western enterprise. This book is one of the few antidotes to this trend, not only by focusing on three distinct developing world contexts--Argentina, South Africa and Tajikistan-- but also by bringing alive in its reflections and theorization the activities and voices of local actors in civic life within these societies."
— Adam Habib, Vice Chancellor, University of Johannesburg

• "At last, a book that convincingly demonstrates that civil society has a decisive role in the success of the democratization process."
— Justin Frosini, Director of the Center for Constitutional Studies and Democratic Development, Bologna.