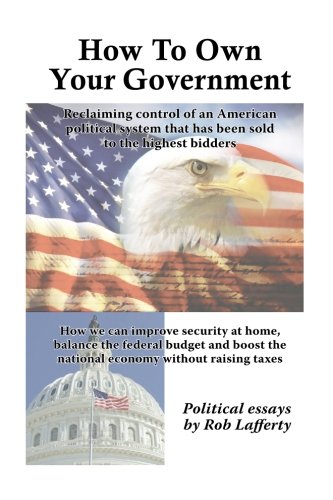 Book: How To Own Your Government - How we can improve security at home, balance the federal budget and boost the national economy without raising taxes by Rob Lafferty

about this book: The 2012 election will be decided by the the number of eligible voters who register and then actually fill out a ballot. Given our history, that will be about 60-65%. That's not a democracy.

This book was written to try and help promote the idea of re-establishing a citizen-owned government. After many years of writing National Affairs columns to reach an audience through my work in the newspaper trade, I wanted to get these ideas out in a larger venue.

The common complaint I've heard from citizens is that government isn't responsive to them, but instead favors well-connected individuals and large corporations. Many of the politicians I've interviewed over the years develop a sense of entitlement and elitism after just a few years in office. The connections between special interests and elected officials tend to distort the viewpoints of those officials.

All of that can be fixed, but it requires an active, participating citizenry. We haven't had that in America for a very long time, but reclaiming ownership of our government is well within our reach. It will take an evolution of the voting habits of the public, but other countries have set a fine example for us to follow.