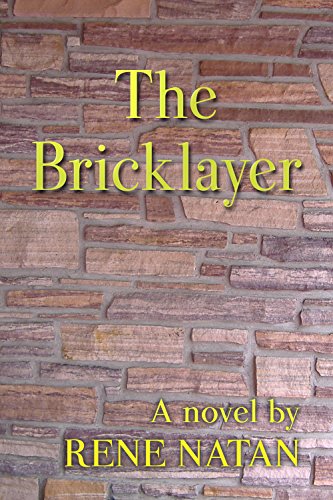 Book: The Bricklayer by Rene Natan

about this book: When my husband, the owner of a small but successful construction company, died, I thought of dedicating my eighth novel to him. We were quite close, and he often talked about the problems he encountered with pricing a job, submitting a bid at the last moment, and being sure no information leaked as he prepared the contract. I thought this subject would make an extremely original theme for a thriller, and the daily activities of a construction company, an excellent background. One problem I had to face was that I wanted to shy away from the traditional structure used in fiction, i.e. to make the protagonist 'a suspect' since the beginning. After all, the protagonist, Fred Dalton, represented my beloved Martin. I compensated this 'deviation' by populating the story with a number of interesting, criminal-mind characters and hard-core (but above-suspicion) killers.

Another point may be of interest to the reader. The house we lived in had walls made of colorful, different-shape natural stones that a 'bricklayer' specializing in this kind of work had come to install. The installation of natural stones, in fact, requires an artistic talent that not too many people have. Hence the title and the cover, which has natural stones in the background and a slit in the middle to signify deception.

The final decision on the title took some thinking as there was already a book with that title (by Noah Boyd). However, there is no copyright for titles and I thought The Bricklayer fitted perfectly my story. So I adopted it.

• For what audience?
One would think that the subject is primarily suitable to a men audience, but from the first pages it is clear that women have a very substantial role in the development of the story and in the conceiving of deadly plots. I hope the originality of the subject, its coherent development from beginning to end, and the entertaining nature of the narration can captive many readers.

• What did I learn from writing this book?
A substantial amount of research is always needed to immerse the reader in an environment that is actual and as close to reality as possible. Writing The Bricklayer was no different than the others. One think was different, though. I developed my tale without a script. I let it come as Stephen King says he does in one of his books (On Writing: A Memoir of the Craft). Whether this approach has produced a good novel, it's up to the reader to judge.

• Now it's time for a snapshot at the story
Saddened by the tragedy that left his beautiful wife in a wheelchair, Frederick Elliot Dalton dives into his work and hires new people for his construction company, The Werkstein. Among these is Moira Johnson, a female estimator. Since Moira joins the company, The Werkstein wins one contract after another. Unfortunately, the presence of a female engineer creates jalousie and rivalry; furthermore, several people linked to The Werkstein die mysteriously.

Slowly, Fred enters the police's radar, as anonymous calls accuse him of having being involved in his wife's death and socializing with people who had a brush with the law. His old friend Nicholas Falcone, in fact, has become a con man; the long-time friend of the family Theresa Wilson is involved in a conspiracy; his two top employees skim from the jobs The Werkstein bids for, and Moira Johnson, unknowingly to Fred, was once a suspect in a murder case.

Fred, still anguished by his wife's death, copes with the situation the best he can, taking accusations and formal interviews in stride. He goes back practising target shooting, a sport that he had neglected while taking care of his paraplegic wife.

Detective Gordon Stevenson of the London Police Service (Ontario, Canada), however, strongly suspects Fred of wrong doing; for weeks he and other members of his unit shadow him and alternate subtle interviews with official interrogations. After all, Fred Dalton is the only link between the recently deceased people and all other so-called persons of interest. Stevenson's investigation doesn't progress at all and his frustration mounts when he discovers that Fred takes lessons on target shooting from Constable Peggy O'Brian of his Investigative Resource Unit. Within a few weeks he discovers that the man courts Peggy—a fact that Stevenson interprets as a challenge. To add insult to injury, Peggy seems to fall for it. When another death occurs, Fred and his company become the focus of a large-scale investigation.