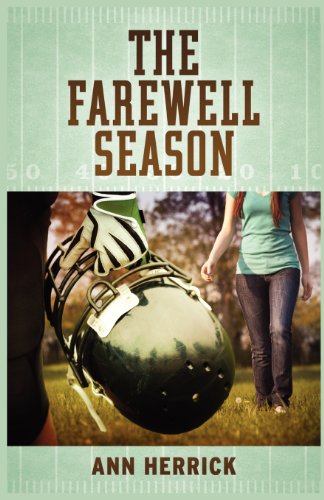 about this book: In The Farewell Season Eric learns to deal with death and grieving, to keep one's heart open even after a great loss and the journey this requires.

Eric is 17 and the death of his father has left a huge void in his life. He tries to deal with that mainly by ignoring his grief and burying himself in football practices.

Eric's refusal to truly face his grief results in unexpected feelings such as anger at his coach, increased fights with his sister, resentment of added responsibilities in helping his mother, and disillusionment with football. He even gets into a fight with his best friend, Rolf, who never fights anyone.

Eric rails against his mother's friendship with Paul Lindquist, his father's business partner, and he's suspicious of the guy in a black pickup who keeps showing up around town. He's also ticked that even his coach seems a little too interested in his mother.

It isn't until Glynnie, a girl who is dealing with the divorce of her parents, chips away at his defenses and gets him to think and feel again that he starts to recover from his pain.