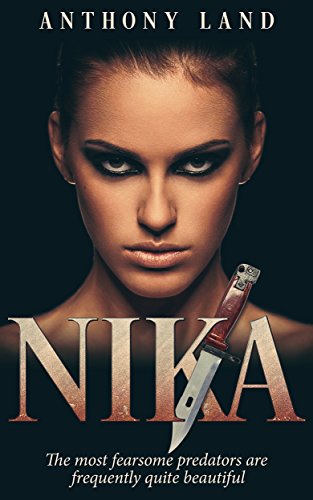 Book: NIKA - The most fearsome predators are frequently quite beautiful by Anthony Land

about this book: Several years ago, I ran across a sketch by the noted American pulp artist Glen Orbik of a beautiful woman, nude, sitting on a bed, a smoking revolver in one hand and a man's fedora set at a rakish angle on her head. He, whoever he was, did her wrong, and she has just done him in and taken his hat for a trophy.

That got me thinking about female avengers – not the cartoonish superheroines that our age has taken a fancy to – women whose psyches, emotions and behavior are essentially male – but the real thing.

Literature since ancient Greece has been largely silent regarding women who become retaliatory killers. And the ancient Greek legends about them are the reason. The shocking acts of vengeance carried out by Medea, Clytemnestra and Procne against those who wronged them made the female avenger a virtual taboo in Western literature for nearly 2,500 years.

I set out to create a modern sister to those ancient avengers. Behold Veronika Voronina Wright – Nika – the eponymous protagonist of my second thriller. She is young, beautiful and highly intelligent – intelligent enough to conceal the profound psychological damage caused by unspeakable crimes and betrayals she suffered as a child.

Nika is Russian, assuring that she received no counseling following the horrors she endured. She has rebuilt her shattered personality, as one character puts it, "with whatever psychic baling wire and string she could find." The result is functional but barely able to hold in check the rage that lurks just beneath the surface.

She comes to an upscale suburb of New Orleans as the trophy wife of a coarse, alcoholic lottery multimillionaire. She tries desperately to fit into an alien and unfriendly small-town culture while maintaining an outward semblance of normality.

But where Nika goes, violent death follows. And even the success of her lifetime search for a family and someone to love cannot quell the anger that has burned away so much of her soul that she no longer considers herself human. As Euripides' Medea proclaims "hate is a bottomless cup; I will pour and pour."

The word 'monster' originally meant something alienated and corrupted through no fault of its own – Frankenstein's monster or the elephant man. By that standard, Nika, a woman in profound conflict with her feminine instincts, is a monster, a beautiful predator and an embodiment of tragedy.