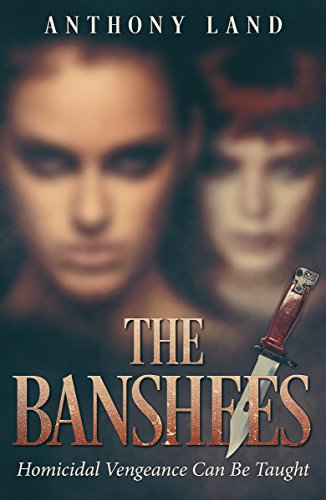 Book: The Banshees - Homicidal vengeance can be taught by Anthony Land

about this book: Our instincts, honed by hundreds of thousands of years of interaction with our own kind, tell us that righteous vengeance is a valid form of justice, regardless of what Deuteronomy, Thomas Hobbes and most codes of criminal law may say to the contrary. And, indeed, the biblical claim "Vengeance is mine, sayeth the Lord" is offset by a far less frequently quoted verse: "Whoever sheds man's blood, By man his blood shall be shed." (Genesis 9:6)

There is a name for people who favor that interpretation – vigilantes.

We are told by the keepers of the law that vigilantes are criminals, abrogating the just power of the state. But many, if not most, of our folk heroes are vigilantes, and, if anything, the popular appeal of the outlaw avenger has grown, even as the restraints of law have tightened.

Nika Varon and Alanna Quinn call themselves The Banshees, after the grisly Irish spectres whose wailing foretells death. They are vigilantes in their own right, and now are teaching other victims how to target and kill serial rapists of children who have escaped punishment for their crimes.

Nika, the beautiful Russian-born victim of such a rapist, is now rich, having shot to death the killer of her multimillionaire husband – a man she married solely as a means of escaping Russia after savagely murdering the pedophile who repeatedly raped her when she was six. The red-haired, vivacious Alanna was similarly defiled by a priest as a little girl in Dublin. Their effort to hunt down her rapist was thwarted by his death from natural causes.

They fell in love after recognizing, as Nika describes it, "the holes in each other's hearts, the tatters of each other's souls." That love and their obsessive hatred of pedophiles are the only things of significance in their lives.

But the hunters are themselves being hunted. FBI agent David Lapin has become as obsessed with putting an end to what he calls their death cult as they are with spreading their message of homicidal vengeance. Their inevitable confrontation, as one reviewer described it, "has the impact of a hard punch in the gut."

Those who've read my other novels know that I don't mollycoddle my characters and if the bluebird of happiness showed up in one of my concluding chapters, it would almost certainly be poisoned or shot.

The whole point of the thriller genre, in my opinion, is to put plausible people in terrible circumstances and see how they behave. Their success or failure should be dictated by the environment of the story and the capabilities, physical and psychological, of the characters.

But isn't fiction supposed to provide an escape from the real world – the world that refuses to bend to our will? It can. But when you reach the final sentence, the real world reasserts itself, as unfeeling and unrelenting as ever, and you are no better prepared by what you have read to understand or deal with it.