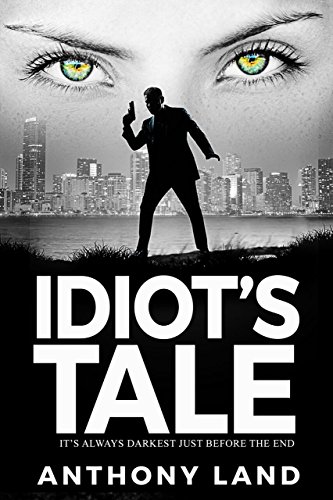 Book: Idiot's Tale - It's always darkest just before the end by Anthony Land

about this book: Idiot's Tale May 12 – 16 free offer
Anthony Land is a pen name and the best idea I had in the process of becoming a writer of dark thrillers. Early on, I described Land as a "dark-souled, bloody-minded, nihilistic doppelgänger" who was intended to free me from the restraints inherent in undertaking a form of writing that was very much at odds with a lifetime of writing under my birth name about things that actually happened or existed. I had no idea how right that decision would prove.

Near the conclusion of IDIOT'S TALE, I was typing a sentence, the content of which I no longer recall. When I looked up at the page, I had actually typed something entirely different – "For me, reality is about to end." I stared at the sentence in surprise, then the light went on. A completely new and immeasurably darker ending to the novel was laying itself out in my imagination. Land was taking over, asserting his preeminence as author.

I went back to the beginning of the manuscript and started making changes to render that ending plausible. Surprisingly, there weren't that many. It had been lurking all along in my subconscious – the supposedly inaccessible part of the brain that contains the atavisms that civilization would have us believe we have suppressed. Maybe my conventional persona couldn't tap into it, but my dark-souled alter ego could. So he is rightly credited with authorship of IDIOT'S TALE – and a subsequent two-volume set of thrillers, NIKA and THE BANSHEES. The conventional me just pounds the keyboard, pays the mortgage and feeds the cats.

The title, obviously, is taken from Macbeth's bitter soliloquy. I had decided on it before I typed the first scene. So I and my alter ego, Mr. Hyde – excuse me – Land, were in synch at some level from the beginning.

What benefit have I derived from writing such dark stuff? In part, it provided an outlet for the despair I was feeling caring for my wife as she gradually succumbed to a series of catastrophic health problems. Writing kept me sane as I helplessly watched her die. That may sound melodramatic, but it's the cold, simple truth.

What will you derive from reading IDIOT'S TALE and its successors? Well, there are as many truths lurking in darkness as there are in the light. Brecht was wrong when he wrote "Die im Dunkeln sieht man nicht" – in darkness, one cannot see them. The truths of the dark side are merely harder to see.